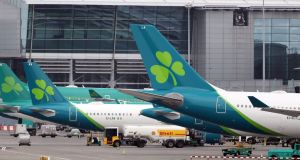 Businesses should seek workers’ consent for pay cuts needed to aid their organisations through the Covid-19 crisis, according to an employment lawyer.

Airlines Aer Lingus and Ryanair temporarily halved pay across the board as coronavirus restrictions grounded flights.

Insulation and building materials manufacturer Kingspan cut executives’ salaries by 50 per cent and reduced staff wages by 40 per cent for April and May.

Many other businesses are weighing similar measures or are applying to the Revenue to take part in a scheme through which the State will contribute to workers’ pay, up to €410 per week.

Síobhra Rush, partner in law firm Lewis Silkin’s employment, immigration and reward division, says that cutting workers’ pay is a material change to the terms and conditions of their contracts.

“Every business needs to be clear that they need to seek workers’ consent to reduce pay,” she explained. “Even if they have the ability to alter contracts, it doesn’t give them carte blanche to do it at any one time.”

The lawyer acknowledged that many organisations had got consent by negotiating pay cuts with unions, or had some other method of consulting with workers.

The airlines and most other big employers agreed pay cuts with trade unions and say that they continue to consult with workers’ representatives.

While businesses have the option of laying off staff, who could then claim the Government’s €350 per week pandemic unemployment payment, Ms Rush argued that not all employers wanted to do this. “They run the risk of losing good people,” she said.

Insolvency specialist Declan de Lacy of PKF O’Connor, Leddy & Holmes warned that businesses, particularly small and medium-sized organisations, needed to decide how they were going to deal with a crisis where they were not earning revenue but wanted to keep paying staff.

He argued that if large numbers of businesses attempted to do this instead of laying off staff for a short period, during which workers would get the Government payment, it risked creating more longer-term redundancies.

“We should socialise the short-term problem so there will not be such a big longer-term problem,” Mr de Lacy said.

1 Should my mam wait for house prices to drop before buying?
2 Covid-19 mortgage breaks: What’s the catch?
3 Almost 70% of home buyers to purchase within next year
4 Revenue faces US drug company Perrigo over disputed €1.64bn tax bill
5 Covid-19 takeover of private hospitals to cost insurers €180m
6 Consumer watchdog tests face masks to ensure they meet standards
7 Brother is dragging his heels as executor of uncle’s will - is there anything I can do?
8 Cheers: Conor McGregor's whiskey races up the sales chart
9 ‘I’m so lucky to be in the Caribbean – a million miles from Derry Girls’
10 Dublin drops out of top 50 in ranking of best cities for start-ups
Real news has value SUBSCRIBE