Total number of confirmed cases rises to 1,089 with 8,486 people tested 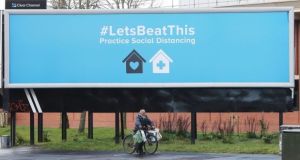 A man passes by a sign in Belfast urging the public to practise social distancing, as the coronavirus outbreak continues. File photograph: Niall Carson/PA Wire

Northern Ireland’s minister of health has warned that people must stick to the rules on social distancing if a ban on outdoor exercise is to be avoided during the coronavirus outbreak.

Robin Swann said on Sunday that “no one would want to take such a measure if it could be avoided,” and it could be prevented “if everyone continues to do the right thing”.

“That means staying at home, only going out if it’s necessary and keeping our distance if we do have to go out,” he said.

Police Service of Northern Ireland (PSNI) assistant chief constable Alan Todd said that “to date, most people do seem to be complying” with the regulations.

“We will continue to monitor the effectiveness of our approach and will keep it under review as we go forward,” he said.

Seven more deaths related to Covid-19 were announced in the North on Sunday, bringing the total to 63.

The total number of confirmed cases in Northern Ireland now stands at 1,089 with 8,486 people having been tested for the virus.

Mr Swann was responding to a similar warning from the UK health secretary, Matt Hancock, who said the British government would “take action” and ban outdoor exercise if people continued to ignore the rules on social distancing.

It follows reports of large crowds gathering in some London parks during sunny weather over the weekend.

However, Mr Swann said he was “very encouraged by the extent to which people across Northern Ireland are following the guidance”.

The PSNI on Saturday said on social media that police in Larne, Co Antrim, were “continuing to get reports about large crowds of walkers and families in local beauty spots”. On Sunday they said that “on a beautiful day we are happy to report people are paying far greater heed to the social-distancing rules”.

Checkpoints were in place in Portrush, Co Antrim, and the police had warned anyone who was “thinking of coming to the north coast this weekend, be prepared to be stopped by police and challenged about your reason for being out and about”.

People in Northern Ireland are allowed to leave their homes once a day to exercise either alone, or with others who live with them. The PSNI has warned that people should not travel for their daily exercise.

Meanwhile, five million items of personal protective equipment (PPE) which are to be sent to Northern Ireland from the NHS central supply are expected to arrive early this week.

Efforts are continuing by the Northern Ireland Bureau and Invest NI in China to order PPE through a different supplier route after it emerged that an order for Chinese-made PPE which the finance minister, Conor Murphy, said had been made jointly with the Irish Government had not been placed.

Coronavirus testing for healthcare workers began in Belfast on Saturday in a drive-through facility established in the car park of the SSE Arena. Testing is on an appointment-only basis.

Minister for communities Deirdre Hargey announced on Sunday that 10,000 boxes of non-perishable goods are to be delivered to vulnerable people affected by the pandemic.