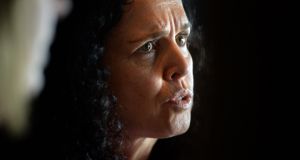 Phil Ní Sheaghdha, general secretary of the INMO, said many nurses and midwives would be out of pocket or with little or no remaining annual leave as a result of childcare difficulties during the pandemic. Photograph: Dara Mac Dónaill/The Irish Times

Most nurses and midwives with childcare needs are using up annual leave to care for their children, a survey carried out by their trade union has found.

The Irish Nurses and Midwives Organisation (INMO) said its members felt let down and abandoned over the failure of the Government to find a solution for frontline healthcare workers who needed childcare arrangements.

The INMO said nearly a quarter - 22 per cent - were using paid childminders of some sort.

It said the majority of these were paying over €100 a week above the usual charges so that they could attend work.

The findings of the survey of more than 1,800 INMO members with childcare needs, which were presented to the Oireachtas Covid-19 committee on Tuesday, found:

- 62 per cent have taken annual leave to care for children,

- 22 per cent are using paid childminders while at work,

- 10 per cent are using grandparents to care for children,

- 69 per cent did not have a partner available to provide childcare - often because they are a single parent, or their partner is another essential worker.

The INMO said the most popular solution to childcare problems among respondents in the survey was for parents to source their own childcare and be reimbursed by the employer.

The INMO has urged the Oireachtas committee to recommend a range of measures, including:

- Reimbursement of any additional childcare costs incurred during Covid-19,

- Compensation for annual leave used to care for children,

- A scheme to pay healthcare workers for any childcare they source themselves,

- Reopening of schools to facilitate children of essential workers.

INMO general secretary, Phil Ní Sheaghdha, said there had been praise for healthcare workers over the past three months but when this died down, many would be left out of pocket and without any annual leave.

“Our members say they feel abandoned.”

“We have long sought a solution to the childcare problem facing our members. They want to do their jobs, while also knowing that their children are being looked after. This is not an unreasonable demand.

“Nobody doubts that childcare in a pandemic is a difficult issue, but so far that difficulty has landed on those who are taking the greatest risks during the pandemic.

“One in ten Covid-19 cases in this country are nurses. We must support them better.”

“There has been an abject failure to provide adequate childcare support. Our members want to do their jobs as professionals without impediment.”