Every year more than 5,000 pilgrims travel to Station Island in Co Donegal 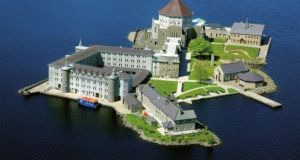 Pilgrims walk bare-footed on the island and touch stones with their bare feet and hands and congregate in a small space. Photograph: loughderg.org

The annual summer pilgrimage to Lough Derg, the lake island retreat in Co Donegal, is being suspended for the first time in 192 years due to Covid-19, the organisers have confirmed.

The pilgrimage season was suspended for safety reasons because pilgrims who walk bare-footed on the island touch stones with their bare feet and hands and congregate in a small space.

Father Laurence (La) Flynn, the prior of Lough Derg since 2013, said that confined space on the island, both indoors and outdoors, was the deciding factor behind the decision.

Every year more than 5,000 pilgrims travel to Station Island, or St Patrick’s Purgatory. The island dates back to the early Christian period as a holy site with the first monks settling there in the fifth century and the location becoming a place of pilgrimage since the the ninth century.

The decision to cancel had “not been an easy call to make” remembering the scores of local season workers and young people who rely on summer work on the island, said Fr Flynn.

“There is nothing we would wish for more than to welcome pilgrims for the Three Day Pilgrimage,” he said.

“The Lough Derg team have examined every aspect of the relevant Government guidelines and following a thorough analysis the reality was clear: the traditional pilgrimage will not be possible.”