Restaurant Association of Ireland calls for ‘common-sense approach’ for sector 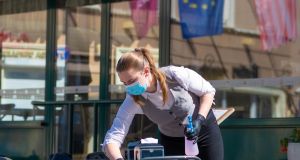 A waitress disinfects a table at a restaurant in Vilnius, Lithuania in April, after restaurants reopened there. Photograph: iStock

With restaurants set to reopen in less than a week, confusion persists about exactly how guidelines for the sector unveiled by Fáilte Ireland last week will operate in practice.

According to the tourism authority, restaurants should have at least one metre between tables, with the same distance maintained between guests not from the same household, even if they are sharing a meal. There will also be a two-hour maximum time slot for reservations, including 15 minutes for cleaning, along with a host of other measures.

The chief executive of the Restaurant Association of Ireland Adrian Cummins questioned how the guidelines will be policed or if they are enforceable either legally or practically.

While staff members will have to be delegated to ensure the new guidelines are being followed, there is no official oversight, which leaves questions over how they will be managed.

Mr Cummins said he had spent several days trying to establish how the new measures will work in practice.

“No one can give me a straight answer,” he told The Irish Times. “Will someone walk into a restaurant and ask what time did each customer come in and then tell them to leave if they have been there for longer than 105 minutes?”

He was similarly sceptical as to how restaurants could police rules on social distancing for people not from the same households.

“Staff are not going to be asking diners about the relationships they have with each other, or if they share a home or who is sleeping with who,” he said. “What we need is a common-sense approach and we need to get back to some sort of normality.

“This has been a traumatic experience for us all, but what is needed now is for people to relax a little bit and get the doors open and keep the tables apart and then we will have to continue to do as we have always done in terms of food hygiene and safety. We have always been best in class in terms, in that regard, and that needs to continue,” Mr Cummins said.

He also said there were reservations about how cafés might be expected to operate as they do not typically take reservations.

He wondered how they would be expected to contact trace. “Cafes cannot afford to have a staff member greeting people to enter,” he said.

Despite the uncertainty that continues to surround the re-opening of the sector from next Monday, Mr Cummins said it was good to have guidelines in place as a starting point even if they a “long way from perfect”.

A Fáilte Ireland spokeswoman confirmed that its guidelines were not legally enforceable but were “provided to assist businesses with safe re-opening in accordance with the Government’s public health advice from the Health Protection Surveillance Centre/Health Service Executive.”

She stressed that restaurant would be expected to “apply the guidelines appropriately as our consumer research states visible health etiquette and safety are of paramount concern to people as they plan their leisure activities”.