November rain: Weekend weather set to be cloudy and drizzly

Overcast conditions are forecast to extend into Monday 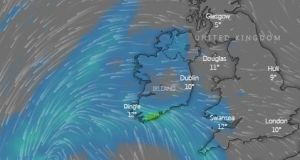 A map showing the rainfall forecast for Ireland at 9pm, Saturday. Image: windy.com

Scattered outbreaks of rain and drizzle is forecast for much of the weekend, although Friday will be mostly dry with sunny spells.

Low cloud and fog patches will gradually clear this morning with sunny spells developing in most areas. Much of Munster will be cloudy with the chance of patchy drizzle developing later, mainly in the southwest.

Cloud will also increase later in parts of south Connacht and south Leinster. Highest temperatures will be between eight and 10 degrees in light to moderate east to southeast breezes.

Friday night will be dry but cold in most areas with lowest temperatures between two and five degrees. Some fog patches will also develop.

Saturday will be mostly cloudy, with persistent rain and drizzle developing in southern coastal areas during the morning, extending northwards, but becoming more scattered. Rain is expected to turn heavier in parts of the south later. Much of Ulster will remain dry until the evening with highest temperatures between nine and 14 degrees.

Saturday night will be cloudy and misty, with outbreaks of rain and drizzle with a few heavier bursts mainly in parts of the south. Hill and coastal fog are also forecast with lowest temperatures between six and 12 degrees.

Sunday will also be cloudy with scattered outbreaks of rain and drizzle, especially in the north and east during the morning, but dry intervals will develop in most areas during the day. Highest temperatures will be between 11 to 14 or 15 degrees, in light to moderate southeasterly breezes.

A spell of persistent rain will develop in the southwest in the evening, extending northwards on Sunday night, but becoming patchy. Minimum overnight temperatures will be between nine to 12 degrees.

Monday will be mostly overcast with occasional rain, persistent at times. Conditions will be mild, with highest temperatures between 12 and 14 degrees, in mostly moderate southeasterly breezes.