Talks to start on Government plans to offer salaries of up to €250,000 to doctors 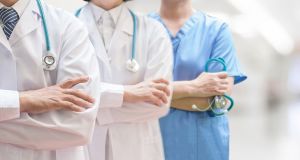 Medical consultants are expected to seek the right to see fee-paying patients in private facilities in their own time, away from public hospitals, as part of future contractual arrangements.

The Government has proposed that in future the only consultant posts it will offer will involve medical specialists treating public patients exclusively. It wants public hospitals to cater only for public patients under the proposed Sláintecare health reforms.

Talks on the new Government proposals for consultants are to get under way on Friday when the Minister for Health Simon Harris meets with the Irish Medical Organisation (IMO). Separate talks are scheduled with the Irish Hospital Consultants Association next week. Formal negotiations are likely to be scheduled for the end of the month.

It is expected that in addition to the new pay proposals, the Government will look for a greater presence by consultants in hospitals at night and weekends under future contractual arrangements.

“We need to look at paying our consultants more, but also to look at things like 24-hour cover, seven days a week, Mr Harris said earlier this week.

The IMO is expected to argue at the talks that the Government’s pay proposals will not deal fully with the issue of the lower pay arrangements for those consultants appointed after autumn 2012, as the new higher remuneration will only be provided to those who agree to end private practice.

It is likely to argue that there should be provision for consultants to treat fee-paying patients in their own time in private facilities away from public hospitals. And the doctors’ representative body is also expected to raise concerns about any plans to introduce the higher pay on a phased basis, on the grounds that the government failed to honour a previous staged pay deal leading to 10 years of court action.

The IMO is also likely to maintain that as well as promising to appoint an additional 1,000 consultants over the next decade, the Government will have to commit to putting in place additional beds and more funding.

Minister for Public Expenditure Paschal Donohoe said before Christmas that while the Government would engage with medical representative organisations on how the new contract would work, the pay on offer had been “fixed” .

The IMO is expected to argue that the pay issue has to be subject to negotiations. It is understood that the Irish Congress of Trade Unions (Ictu) made similar arguments to the Taoiseach Leo Varadkar in recent weeks.

Meanwhile the Department of Public Expenditure said on Thursday that the cost of implementing the deal that ended the nurses’ strike last February will be nearly €100 million in 2019 and 2020. In addition, another €40 million will be paid to nurses over the same period in increased allowances as recommended last year by the Public Service Pay Commission.