Hundreds of childcare facilities to close in one-day stoppage

Organisers say under-funding of sector has resulted in unsustainable services 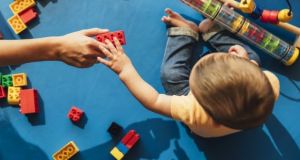 Creches and pre-school facilities will close on a midweek day in either late January or early February.

Hundreds of childcare facilities are set to shut for a day in the coming weeks following a meeting of creche operators and childcare workers on Thursday night.

A range of childcare groups met to finalise plans which will sees creches and pre-school facilities close on a midweek day in either late January or early February. Full details of the action are due to be announced at midday on Friday.

The plan has the support of groups including the Federation of Childhood Providers, which says it has 1,000-plus members, and the trade union Siptu, which represents 5,000 early years professionals.

Other groups representing childcare providers and professionals were also present at the meeting.

None of the groups at Thursday night’s meeting commented, though it is understood that agreement has been reached to press ahead with a mid-week work stoppage and demonstration outside the Dáil.

The action is being timed to coincide with the run-up to the general election.

Organisers claim there is “huge momentum” behind the planned day of action which has the backing of many providers, workers and parents.

Although the action could cause large-scale disruption for working parents, the protest organisers say many mothers and fathers support their actions and want to attend the demonstration.

But some groups fear the action could divide public opinion. It is unclear how many facilities are likely to close given divided opinion within the sector, though most agree that hundreds of facilities will close.

Larger childcare organisations and those offering full daycare services – paid for by parents – may be reluctant to inconvenience parents who are paying for services.

However, sessional services – such as those providing the “free” pre-school year – may be more likely to protest, according to some involved in discussions over the protest.

It is likely that the Government would cease providing payment to childcare providers for the duration of any action which disrupts State-funded early years education.

In a statement, a spokesman for the Department of Children said it funded the provision of pre-school childcare by contracting with childcare providers to deliver childcare services.

“Payments are made under a number of different schemes, including the free preschool scheme, ECCE and the National Childcare Scheme. Payments are calculated on the number of hours of care provided. Providers should inform Pobal if they are not going to provide the contracted service,” the spokesman said.

The spokesman added that the Minister for Children Katherine Zappone recognised that the last two months have been a difficult period for childcare providers, due to factors such as as the need for most operators to renew their Tusla registration, the withdrawal of the insurance for many providers and the recent introduction of the national childcare scheme.

On foot of this, he said the Minister approved additional payments to providers last month.

“The Minister has repeatedly said that in order to address the years of underinvestment in childcare we need to intensify the rate of investment to further address access, affordability and quality in early learning and care and school-age childcare,” the spokesman said.