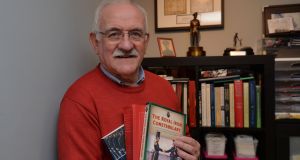 It has been a rough few days for retired garda Jim Herlihy, the public face of the Historical and Reconciliation Police (Harp) Society.

Not only was the commemoration service at Dublin Castle which he and others had worked hard to bring to fruition postponed following public protests, but he was subjected to vile abuse on social media.

“Commemorate the brit [sic] black and tans. F**k off vermin brit loving scum,” one Facebook user told him, in a not untypical comment.

Mr Herlihy (65), who retired from An Garda Síochána in 2013, said he had never seen anything like the reaction to the proposal to commemorate the Royal Irish Constabulary (RIC) and the Dublin Metropolitan Police (DMP).

“It was absolutely vitriolic from the keyboard warriors,” he said. “It’s scurrilous what is being written at the moment. It reminds me of when I was doing training in Templemore and these guys were dying on hunger strike [in 1981] and there was that tension around because you didn’t know what was going to happen next.

“There’s also politics coming up before an election. We never wanted anything to do with politics.”

The Harp Society grew out of a mass for Sergeant Daniel Maunsell who was shot dead in August 1920 in Inchigeelagh, Co Cork by the IRA. The service was held in 2008 and relatives of Maunsell and the three men who shot him were there.

“Four memoriam cards were put on the altar. It was extraordinary the way people mixed with each other afterwards,” he said.

Two years later a mass was held in Granard, Co Longford in 2010 organised by former garda James McCarthy for deceased members of the RIC.

The church was packed. Mr McCarthy went with retired inspector Gerry Lovett to host an event in Glasnevin Cemetery at the graves of two RIC men who had been killed on duty.

They noticed there was no memorial for the RIC or the DMP, the two forces that policed Ireland between 1836 and 1922. A committee was formed and the Harp Society was founded.

The society, which has a committee of seven and approximately 250 members, first came to public attention during the Easter Rising commemorations in 2016. On Easter Monday, the first fatality in Dublin of the Rising, Constable James O’Brien of the DMP, was remembered.

That event led to one of the best unscripted moments of the commemorations. As the society was laying wreathes at the gates of Dublin Castle, Freya Connolly, the great-granddaughter of Seán Connolly, laid flowers beside it. Connolly, who was also shot dead on the day, led the Citizen Army in the attack on Dublin Castle.

There was no official commemoration to remember the policemen who died in the Easter Rising, but the Harp Society decided to regroup for the War of Independence centenary.

It began hosting an interdenominational memorial service every year. “We kept sending out invitations. For the first time the Minister (Minister for Justice Charlie Flanagan) came this year.”

That event was held in Mount Argus Church in Dublin. Afterwards the Minister met several widows of RUC officers who had been killed in the Troubles.

“He said he was moved by that. He realised probably for the first time how raw all of this is,” Mr Herlihy said.

The Harp Society, he stressed, had “no hand, act or part” in the now-postponed State ceremony. “The only thing we knew was that the event was in Dublin Castle. It was also supported by the Taoiseach. We expected that he might have attended.”

It is clear from the response to the proposal that some sections of Irish society do not see the RIC and the DMP in the same light as the Harp Society does. Mr Herlihy maintains that they were respected police forces up to 1919.

“The RIC and DMP were two of the most sought-after jobs up to the turn of events in 1919. From Soloheadbeg they came under increased attack. They were sitting ducks,” he said.

Two RIC constables – James McDonnell and Patrick O’Connell, who hailed from families in Cos Mayo and Cork respectively – were killed in the Co Tipperary ambush of January 21st 1919, the first engagement of the War of Independence .

“There are countless cases like this. There are 100 families I know like that. We would like that there was a memorial in a secure place that they could attend.”

The Harp Society is still hopeful that the commemoration service will go ahead as Mr Flanagan has stated that it will.

In any case the RIC and DMP will certainly be remembered during the Decade of Centenaries.

The British-based Police Roll of Honour will host a service in St Paul’s Cathedral, London on April 29th, 2022 to mark the centenary of the disbandment of the two forces.