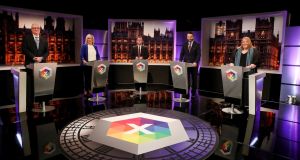 The BBC discussion was billed as a “leaders’ debate” although the outgoing DUP Lagan Valley MP Sir Jeffrey Donaldson appeared instead of leader Arlene Foster. The four other main party leaders did appear. Photograph: Pesseye/PA Wire

Brexit, a united Ireland, Sinn Féin abstentionism, the Irish language and restoring Stormont were some of the issues senior Northern Ireland politicians clashed over during a debate ahead of Westminster general election polling day.

The BBC discussion on Tuesday night was billed as a “leaders’ debate” although the outgoing DUP Lagan Valley MP Sir Jeffrey Donaldson appeared instead of leader Arlene Foster. The four other main party leaders did appear - Michelle O’Neill, Northern leader of Sinn Féin, Colum Eastwood of the SDLP, Steve Aiken of the Ulster Unionist Party and Naomi Long of Alliance.

On whether Brexit made a united Ireland more likely Mr Donaldson said he did not believe there was an “existential threat” to the United Kingdom.

Ms O’Neill said it “certainly makes people focus their minds on where their interests are best served”.

Ms Long said Brexit “has certainly made Northern Ireland less stable”. She did not think it made unity inevitable but it brought the argument over the Border “back front and centre of the political discourse”.

Mr Aiken said “Boris Johnson’s United Kingdom breakup deal is going to make Northern Ireland a place apart” and also was going to “drive Scotland away from the UK as well”.

Mr Eastwood challenged Sinn Féin’s abstentionist policy and said that in the past nine years Sinn Féin MPs had taken £5 million in expenses even though they did not take their seats. That was enough to pay 220 nurses and 206 teachers.

Ms O’Neill said 35 SNP MPs couldn’t stop Brexit and “one or two Irish MPs will never make a difference”. She said to Mr Eastwood, “Your aspirations are to lie on the green benches along with Jacob Rees Mogg.”

Mr Aiken said if Sinn Féin were prepared to go into the coffee shop at Westminster they should be prepared to sit in the House of Commons.

Mr Donaldson repeated his opposition to Mr Johnson’s deal insisting it would create a border down the Irish Sea. He still believed the DUP could carry weight in the next British parliament. “I think this election is going to be quite close and there is every prospect that Northern Ireland MPs can use their influence again in the House of Commons to get the changes that are necessary,” he said.

Ms Long said the DUP had delivered “chaos and uncertainty” in relation to Brexit. Her fear was that the blow that Northern Ireland “will suffer as a result of Brexit will set us back even further”.

Mr Aiken said there must be “no borders North and South, East and West”. He blamed the DUP for creating the conditions for Mr Johnson’s Brexit deal with the EU and said that in the event that it went ahead there must be a “substantial mitigation” programme to offset the economic damage to the North

Mr Eastwood said that on Brexit he did not “believe the battle is over” and that the referendum result could be overturned. That could happen through a “coalition of MPs prepared to vote against Brexit in the House of Commons.”

Ms O’Neill said the ability of the pro-Remain parties to work together illustrated an opportunity for a new form of politics.

Mr Donaldson said that if a deal to restore Stormont could not be achieved by the January 13th deadline he would be putting his “hand up for direct rule if Sinn Féin cannot get their act together and get back to work at Stormont”.

Ms O’Neill said direct rule was “not an option”. When Mr Donaldson challenged her to re-enter a re-established Northern Assembly “because that would give everybody in Northern Ireland hope” Ms O’Neill said she too wanted powersharing back but it had to be “sustainable and credible”. Any reformed Stormont would require a “substantial financial injection from the British government to deal with the health crisis and other issues.

Mr Eastwood in an exchange with Ms O’Neill said the problem was that “one party would not go back into government without an Irish language act, the other won’t go in with one - none of the rest of us have red lines”.

Mr Donaldson and Ms O’Neill insisted they both wanted Stormont back while continuing to clash on the how the Irish language issue might be resolved.