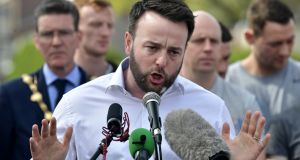 The standing ovation for Fr Martin Magill’s comments during the funeral service for Lyra McKee in Belfast seemed to be a public cry from the heart for the Northern parties to work together again after well over two years of sullen political stasis.

Tomorrow, more than 1.3 million voters will have an opportunity to reinforce that message when the Northern Ireland local elections are held.

But whether those who come out to vote decide to make an appeal for compromise and moderation following the New IRA murder of McKee or hold to the polarised status quo is hard to forecast.

One shouldn’t be cynical, but Northern Ireland has witnessed many false dawns when previous outrages weren’t the watershed moment many hoped they would be. Maybe it will be different this time?

How it all pans out will depend on which message the electorate heeds. Will voters follow the traditional pattern, with many unionists voting to safeguard the union with Britain and many nationalists correspondingly voting to strengthen the case for Irish unity?

With Brexit and the growth of vexed civic nationalism, and the matching reaction from fearful unionism, that appeared to be the way politics was heading.

But there was a definite shift in mood after McKee’s murder.

All the parties say the key message on the doorsteps is that people want the Northern Executive and Assembly reinstated.

“There is no doubt about that,” said a senior DUP figure who has been canvassing for party candidates in recent weeks.

“But when we ask our voters what issues are they prepared to move on to get Stormont back – well that’s when it’s hard to get a firm answer.”

While the total eligible electorate is 1,305,553, possibly about half that will turn out to vote based on the 51 per cent turnout from the last local government elections in 2014.

But if the turnout reaches higher than 60 per cent, perhaps into the mid-60s – as it did during the contentious Assembly and Westminster elections of 2017 – then perhaps it will be a signal that a reinvigorated public wants its politicians to make real progress when the talks designed to restore devolution begin next Tuesday.

Foster has stuck to a traditional trope to try to animate the unionist base, insisting that the constitutional issue must remain to the fore of voters’ minds.

She has said: “Some claim it does not matter which party you vote for, but you can be absolutely certain that it would be heralded as a massive success for republicans, and a massive defeat for unionism, if unionism was to be split and republicans were to have a massive win and use the election results to strengthen their demand for a Border poll.”

Equally the message from McDonald and other senior Sinn Féin figures is that “now is the time to talk about unity”, with deputy leader Michelle O’Neill – in an obvious taunt to the DUP – adding that there can be no place for “arrogance, sectarianism and homophobia” in political institutions or council chambers.If the DUP and Sinn Féin hold or increase their tally of seats then Tánaiste Simon Coveney and Northern Secretary Karen Bradley can hardly tell them when the talks begin that the public has spoken and it wants the two parties to compromise.

The main pressure appears to be on three other parties – the SDLP, UUP and Alliance – which could be in the Executive if Stormont is restored.

This will be the first electoral examination for the SDLP since its partnership with Fianna Fáil was formalised earlier this year. Fianna Fáil leader Micheál Martin did some canvassing with his SDLP counterpart Colum Eastwood in Belfast and Newry this week.

Eastwood said voters were very interested in the “developing partnership” with Fianna Fáil and “liked the idea of working on an all-Ireland basis”, although it must be said that the link-up didn’t appear to be a major selling point made to voters during SDLP canvasses.

Eastwood is likely to be satisfied if the party can hold close to the 66 seats it won in 2014.

Holding the line also may be the chief ambition of the Ulster Unionist Party and Alliance, although Alliance with the popular Naomi Long at the helm might be in a better position than the UUP to make some ground in this election.

The smaller parties such as Traditional Unionist Voice, the Greens, People Before Profit, the Progressive Unionist Party and a range of Independents will be hoping to consolidate or make gains.

There is another complicating issue with the emergence of Aontú, which is fielding 16 candidates including two outgoing councillors. Leader Peadar Tóibín, a former Sinn Féin TD, says Aontú is campaigning on a range of issues such as “unity, economic justice and regional development” but that the abortion issue has featured prominently, chiefly being raised by people at the doors.