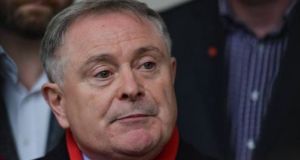 Brendan Howlin: he said his party’s candidates were standing because they wanted to solve the homelessness crisis, deal with climate change, and increase living standards

The Labour Party has achieved a 41 per cent female gender quota for the upcomig local and European elections, party leader Brendan Howlin has said.

“Among our local election candidates we have nearly 50 candidates who have never run for office before, but who have chosen to stand with the Labour Party. They will stand alongside 36 sitting Labour councillors who are seeking re-election and a number of other experienced candidates,” Mr Howlin said at the launch in Dublin at the weekend.

He said the party was fielding 14 candidates who were under the age of 30, describing them as the “next generation of Labour leaders”.

“For this local election we set ourselves the ambitious target of ensuring at least 40 per cent of our candidates were of either gender. This target was made all the more challenging as the majority of our returning councillors were men.

“But I am delighted and proud to say that we have achieved and exceeded our target. In fact, 41 per cent of our candidates will be women, which is a tremendous achievement, and an important step towards changing the culture of politics in this country.”

Mr Howlin said the party’s candidates were standing because they wanted to solve the homelessness crisis, deal with climate change, and increase living standards.

“The battle we are fighting is to restore social Europe to the heart of the European project. Europe needs to reduce inequalities. Europe needs to strengthen public services. And European workers need a pay rise.

“We will be demanding a new direction for European economic policy: to raise wages, to invest in public housing and to take decisive steps at European level to reverse climate change.”