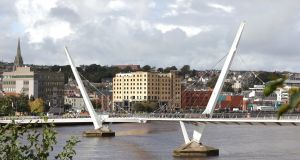 The Peace Bridge in Derry. The Stormont Executive announced a wide-ranging series of restrictions for the Derry City and Strabane Council area this week in an effort to stem rising Covid-19 infection numbers. Photograph: Liam McBurney/PA Wire

Almost 1,000 new cases of coronavirus were reported in the North on Friday in the largest daily increase since the pandemic began.

According to the daily statistical bulletin released by the North’s Department of Health (DoH), 934 people tested positive for the virus in the 24 hours to Friday.

The figure is more than double the previous highest number of daily cases, which was set on Wednesday.

The North’s health minister, Robin Swann, described the increase as “unprecedented”, telling the Assembly that “the warnings about the resurgent Covid-19 threat are coming true in the starkest of terms.”

He said the figures suggested “something has gone badly wrong, and I think as well as trying to get on top of this urgently there does need to be a review about the strategy.”

He said the Executive should “immediately commission an external view on how the coronavirus control effort has been happening in Northern Ireland.

“They should urgently review what their arrangements are for the control of the pandemic in Northern Ireland because at the moment, it certainly isn’t working.”

Dr Scally, who has consistently advocated an all-island approach to tackling the pandemic, said he had “no doubt” that “if there had been a unified approach, north and south, that had a well thought-out strategy, the situation would be entirely different.”

The health ministers on both sides of the Border and the Sinn Féin junior minister Declan Kearney discussed the importance of a cross-border response to the pandemic at a Health and Food Safety meeting of the North South Ministerial Council (NSMC) on Friday.

In a joint communiqué issued after the meeting, the ministers said they were “committed to building on the experience and the relevant learnings from the first phases of the pandemic” and would “continue to exchange views to foster commonality in their approach, where possible.”

The new cases reported on Friday include 201 in Derry City and Strabane District Council, where wide-ranging restrictions aimed at tackling the dramatic rise in infections in the area are due to come into force on Monday.

The measures include strict limits to the hospitality industry and an instruction to avoid travel into and out of the area.

There are also concerns over the increasing number of infections in Belfast, where 191 new cases were confirmed in the last 24 hours, and Newry Mourne and Down, which had 182 new cases.

The North’s chief medical officer, Dr Michael McBride, told the BBC further restrictions are likely in the weeks ahead if case numbers continue to rise, and did not rule out a short, intensive period of lockdown.

“I do believe that we need to plan and prepare and look at options around a so-called circuit breaker,” he said.

One more coronavirus-related death was reported on Friday, bringing the total recorded by the Department to 582.

The Northern Ireland Statistics and Research Agency (NISRA) - which records all deaths which mention coronavirus on the death certificate - said on Friday that the number of such fatalities was 901 as of September 25th.