Two men arrested after cannabis worth €140,000 seized in Dublin 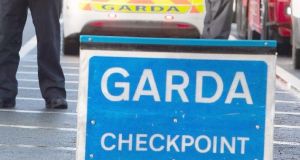 The drugs were found after a car was stopped in Dublin on Saturday evening. Photograph: Collins

Two young men have been arrested after cannabis worth an estimated €140,000 was seized by gardaí in Dublin on Saturday.

The drugs were found after gardaí stopped a vehicle in Clondalkin yesterday evening.

In a statement gardaí said the officers “detected a smell of cannabis from the vehicle” promoting a search in which suspected cannabis herb worth €100,000 was found.

A follow up search in the Ballyfermot area resulted in the seizure of a further €40,000 cannabis and a small quantity of suspected cocaine.

Two men aged in their 20s have been arrested in connection with the seizures and are being questioned at Clondalkin Garda station under Section 2 of the Criminal Justice (Drug Trafficking) Act 1996.