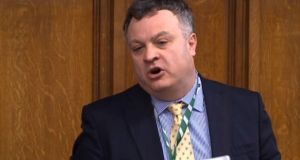 There is no current case for a Border poll on a united Ireland, Alliance deputy leader Stephen Farry said at the party’s 50th anniversary annual conference. File Photograph: HO/PRU/AFP via Getty Images

There is no current case for a Border poll on a united Ireland but there is space for a “civilised, rational and evidence-based discussions” on the issue, Alliance deputy leader Stephen Farry said at the party’s 50th anniversary annual conference.

Addressing up to 400 delegates at the conference at the Stormont Hotel in east Belfast on Saturday, Dr Farry said Alliance recognised that Brexit and other factors had energised the debate around the constitutional question.

“Given the nature of Alliance, some may suggest that this would be a particular challenge. But, on the contrary, these are debates in which we can engage with confidence,” said the North Down MP.

Dr Farry ended up delivering the conference’s keynote speech as party leader Naomi Long was unable to attend due to a chest infection.

A party spokesman said that Dr Farry’s speech also contained input from the Alliance leader. He also explained that her illness was not coronavirus.

“Alliance is not a party that is defined by the constitutional question,” said Dr Farry. “While there may be some members who prefer the union, and some who prefer a united Ireland and indeed many who are open to persuasion, we are not only united, but defined, by our shared commitment to make this society work, to overcome division and to build a better future.

“We don’t believe that there is currently the case for a Border poll, and nor are we pursuing one, but we do recognise that there is a very fluid situation and multiple active debates are underway,” he said.

“We can with confidence, and without prejudice to any outcome, engage in civilised, rational and evidence-based discussions. In all respects, we will be guided by our vision and values and always advocate what we think is right for Northern Ireland. ”

Dr Farry was addressing the conference after local, European and Westminster elections last year which saw the “Alliance surge” and the party’s overall vote more than doubling from 8 per cent in 2017 to 17 per cent in 2019.

Analysing that success, Dr Farry said that “for starters” more and more people were moving away from traditional labels, and expressing open, mixed and multiple identities.

“Second, we called Brexit correctly, right from the start, and have been consistent throughout. We have clearly articulated and defended Northern Ireland’s interests.

“Third, we have channelled frustrations around the politics of deadlock and delay, and the desire to see change, reform and delivery. Success has bred further success.”

Dr Farry said the “old canard” of a vote for Alliance being a wasted vote had been shattered. “We have proven that we can win anywhere in Northern Ireland. And we have drawn votes from right across the community. We have proven that in a political context usually framed around the constitutional question and a clash of identities that a liberal and cross community party can not only survive but flourish.”

Dr Farry reaffirmed the party’s commitment to Europe and the European Union. “We should look forward and aspire to Northern Ireland rejoining the EU sooner rather than later,” he said.

“But for now, Boris Johnson is set to pursue a reckless hard Brexit. The Brexit extremists exhibit the characteristics of revolutionaries, in this case fuelled by a libertarian ideology and wishful, delusional thinking. Dissenting voices are labelled as enemies of the people,” he added.

“The UK is turning its back on is biggest and most important neighbours for the pipe dream of a global Britain, all the time failing to acknowledge that it is through the EU that the UK can best project soft power and expand international trade.”

Dr Farry said that the British government appeared determined to turn its back on international human rights standards and that British prime minister Boris Johnson’s Brexit deal risked “leaving Northern Ireland in a ‘No Man’s Land’, with the Good Friday agreement undermined and a renewed risk of the return of a hard border on this island”.

“It is not in our interests to have a cowboy economy,” he added.

Dr Farry said the recent New Decade, New Approach deal that restored Stormont was not perfect but was a “necessary starting point” to make politics work.

He called for a reform of Assembly veto system, the petition of concern; a change of the designation system at Stormont where politicians identify as unionist, nationalist or “other”, which is Alliance’s designation; and reform of the North’s finances.

And referring to the absent leader Dr Farry said that Naomi Long as Minister of Justice would work for victims of domestic, sexual and other abuse; introduce a stalking Bill; and “lead a cross-departmental approach to stamp out paramilitary control of communities, build a culture of lawfulness and confidence in the entire justice system and create safe, shared communities”.