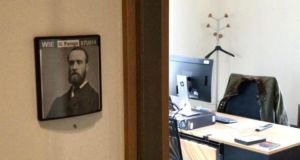 The Victorian gentleman whose portrait is displayed underneath Nigel Farage’s name on the door of his Brussels office is of Irish nationalist leader Charles Stewart Parnell.

The Victorian gentleman whose portrait is displayed underneath Mr Farage’s name on the door is of Irish nationalist leader Charles Stewart Parnell.

Mr Farage’s fellow Brexiteer Jacob Rees-Mogg evoked the name of the “uncrowned king of Ireland” in the House of Commons this week, but not in a good way.

The attempts by Opposition and rebel Tory MPs to wrestle the agenda from the British government was described by Rees-Mogg, the leader of the Commons, as the “most unconstitutional use of this house since the days of Charles Stewart Parnell when he tried to bung up Parliament”.

The reference is to Parnell’s policy of obstructionism which he and other Irish MPs employed in the House of Commons in the 1870s and 1880s to telling affect, obstructing the work of parliament to draw attention to Irish issues.

Unlike Rees-Mogg, Farage regards Parnell as one of his political heroes, seeing many parallels between Britain’s attempt to leave the European Union and Parnell’s attempts to get a greater measure of freedom for Ireland through the Home Rule bills of 1886 and 1892.

Farage sees himself in the same mould as Parnell as a “great disruptor” of the established political order.

Mr Farage told The Irish Times he has “long been a great admirer of Charles Stewart Parnell and have his portrait on my MEP office door in Brussels”. “Why? Because Parnell and his party acted as the great disruptor of the UK parliament in order to draw attention to the cause of national independence.

“I have tried, in the same way, to cause some disruption in the European Parliament and I hope that I’ve been effective in drawing attention to the cause of the UK break free of the EU’s political union based in Brussels.

“If you believe in the cause of national freedom and self-determination, you cannot consent to Brussels rule.”

Parnell’s reputation as the “great disruptor of the UK parliament” rose out of the Home Rule party’s decision to obstruct the business of parliament by seeking to filibuster bills going through the house.

They did so by talking for hours at a time, drafting in arcane amendments, going over the same territory again and again until it left their fellow MPs utterly exasperated.

The tactic of parliamentary obstruction originated with a former member of parliament from Cork, Joe Ronayne, who said the only way to get English MPs to take Ireland seriously was to take a serious interest in English affairs.

They tabled amendment after amendment to legislation. Their purpose, as Parnell put, was to “force the house to treat Irish questions properly”.

During one session relating to the Mutiny Bill, Parnell and his fellow Irish MP Joseph Biggar challenged the government over almost 40 clauses which were otherwise relatively uncontroversial.

MPs began to dread the intervention of Biggar in particular, the member of parliament for Cavan. Biggar, who possessed a monotonous tone, showed nerve and stamina in frequently speaking for hours at a time on obscure subjects despite howls of objection from his fellow MPs.

He would purloin books from the House of Commons library and begin to read from them at length. When the house speaker told him he was indistinct, Biggar moved closer to the front and started again – as he did so with the Threshing Machines Bill, an issue in which he had no interest or knowledge.

The tactic of obstructionism reached its peak during a 41-hour session to discuss the Coercion Bill of 1881. Eventually the House of Commons brought in new procedures to limit the ability of MPs to thwart the business of government.

Hermann Kelly, Irish Freedom Party founder, is press officer for the Europe of Freedom and Direct Democracy (EFDD) group in the European Parliament of which Mr Farage was a former president.

Mr Kelly said the picture of Charles Stewart Parnell has been “on his (Farage’s) MEP door in Brussels for as long as I can remember and I’ve been there for almost 10 years.”

He said there were parallels between Irish MPs as a minority at Westminster of which they were once 16 per cent of the total and in the European Parliament where they occupy 1 per cent of the seats.

“The problem is that people we did not elect and in whom we do not have communality have the ability to impose laws on us and there is nothing we can do. That is not the position of a sovereign people,” he said.