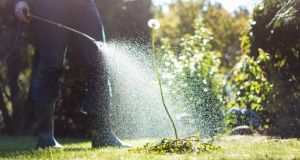 Glyphosate is cleared for use in the EU until December 2022. Photograph: iStock

Ireland is unlikely to follow Germany and other EU countries in banning use of the weed killer glyphosate– the subject of billion-dollar US lawsuits over claims it causes cancer.

The German ban will apply from the end of 2023 while its use will be limited before then, its environment ministry has said.

The Department of Agriculture said it would await the outcome of a review to begin later this year.

Germany’s move comes after Austria’s lower house of parliament in July passed a Bill banning all uses of glyphosate and some 20 French mayors last month banned it from their municipalities, contrary to the French government’s stance on the herbicide.

The chemical company Bayer disagreed with Germany’s decision, saying: “Such a ban would ignore the overwhelming scientific assessments of competent authorities around the world that have determined for more than 40 years that glyphosate can be used safely.”

Glyphosate is cleared for use in the EU until December 2022. Glyphosate-based herbicides are the most commonly applied weed control products in the world.

The German government said it would systematically reduce the use of herbicides containing glyphosate from 2020.

It said there would be a substantial reduction in the quantity of herbicides containing glyphosate being sprayed – due to bans on use in private homes and gardens along with public areas, as well as a ban on use before harvests and considerable restrictions on use before sowing and after harvests.

Branded as Roundup, it was developed by Monsanto. It is now off-patent and marketed worldwide by dozens of other chemical groups. Concerns about its safety emerged when a World Health Organisation (WHO) agency concluded in 2015 that it probably causes cancer.

Bayer, which acquired Monsanto last year, says studies and regulators have deemed glyphosate and Roundup safe for human use. The company faces lawsuits over claims the product causes non-Hodgkin’s lymphoma.

A Department of Agriculture spokeswoman said regulatory decisions on the approval and use of pesticides were based on “the scientific consensus view of all the relevant technical information from all sources”.

On glyphosate, it is guided by the European Food Safety Authority (EFSA) and the European Chemicals Agency (ECHA), who have both concluded, on the basis of extensive reviews, and involving public consultation, that glyphosate can be used safely without putting consumers or users at risk, she said.

This process guided the decision to renew the authorisation of glyphosate within the EU in 2017. Consideration of a further renewal of approval of glyphosate would begin in December 2019 and a full dossier submitted to the Member States Assessment Group on Glyphosate (made up by France, Hungary, the Netherlands and Sweden) by mid-June 2020.

This process will involve a comprehensive scientific evaluation of all relevant data from all sources and will include a public consultation period. “The Department will continue to monitor international peer-reviewed scientific evidence and the guidance provided by EFSA and ECHA,” the spokeswoman added – Additional reporting Reuters