One of the world’s tallest ships docks in Dublin

Cuachtémoc, pride of the Mexican navy, will be open to the public from Friday to Monday 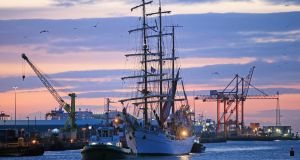 One of the world’s largest tall ships, the Cuauhtémoc has arrived in Dublin Port for a five-day visit to the capital, carrying 257 crew. Photograph Nick Bradshaw/ The Irish Times

Dublin has had quite a few tall ships visitors over the years, but they do not come much taller than Mexico’s Cuachtémoc.

The pride of the Mexican navy, named after the last Aztec emperor, is a three rigged training ship which is almost 78 metres long and 45 metres high and is one of the tallest ships in the world.

She slipped into Dublin Port before dawn on Wednesday morning on the penultimate stop of her five month tour of North America and Europe.

Her arrival was met with quite a fanfare as the ship’s tannoy pumped out a medley of patriotic Mexican songs and a huge Mexican flag was unfurled on the bow of the ship.

According to her commanding officer, Capt Carlos Gorraez, the Cuachtémoc is the “flagship of the Mexican navy” and a training vessel which attracts cadets, not only from Mexico, but from other countries too.

Capt Gorraez said: “It is a great honour to be in charge of this ship and a great responsibility. Here we work with the future of the Mexican navy. This is a school ship where the cadets who come here complement their academic formation that they have acquired in the naval academy.

“They learn and acquire experience in the sea. They forge social and professional competencies and maritime knowledge. They are going to be the future leaders of the Mexican navy.”

The mostly young crew of 257 have been at sea for more than five months. They are already old hands, scrambling up the rigging on their arrival in Dublin, oblivious to the drop below.

They sailed into a storm off the coast of Canada to pick up some speed and were forced to navigate a 35 km head wind on their way from Hamburg to Dublin.

For some of them, though, it has been the trip of a lifetime seeing places they would never have seen before.

“It is a good life. You can learn a lot of cultures. It’s an amazing experience. We always miss home, but this is something we are doing for our career and for our future so it is worth it,” said cadet Laura Carolina Flores Arellano.

“We have everything. We have a kitchen, a hospital, a lot of TVs. I am having a great time on this trip. I’m not dying to get back home. We manage to have fun,” said her fellow cadet Pedro Arellano.

The ship will be open to the public from Friday to Monday and from 11am to 8pm at Sir John Rogerson’s Quay. Mexican ambassador Miguel Malfavón says the ship is a “little bit of Mexico” abroad.

“They will see the strength of Mexico and the courage of the sailors. The arrival of the Cuachtémoc reminds us of the affinity and friendship that exists between our two nations and symbolises the hand of friendship from Mexico to Ireland, ” he said.

“For most of the crew on board, this is their first visit to Ireland, marking a new generation of Mexican-Irish exchange.”