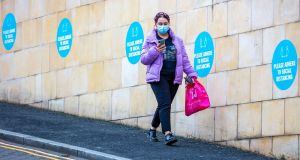 Talks are due to resume on Thursday between Northern Ireland’s ministers after they again failed to reach agreement over whether or not to extend the current coronavirus restrictions.

The regulations, which forced the closure of much of the hospitality sector and close contact businesses, will expire first thing on Friday unless a deal is reached.

A meeting of the Executive was adjourned on Wednesday night with the latest proposal, a compromise position put forward by the Minister for Justice, Alliance Party leader Naomi Long, still under discussion.

It is understood the paper tabled by Ms Long proposes a one-week extension of the current “circuit breaker” lockdown, which was earlier put forward by Minister for Health Robin Swann but was blocked by the DUP.

This would be followed by the partial reopening of the hospitality sector, according to a plan put before the Executive by DUP Minister for the Economy Diane Dodds earlier, which was rejected by a majority of ministers.

An increasingly acrimonious split has been deepening in the Executive since ministers met on Monday to discuss the regulations, with Stormont sources describing the situation as deadlocked.

Four of the five parties in the Executive - Sinn Féin, the SDLP, Alliance and the Ulster Unionist Party - backed a proposal tabled by the Minister for Health to extend the current regulations for two weeks. This was on the advice of the North’s Chief Medical Officer, who is understood to have advised that any easing of the restrictions would cause “excess deaths”.

However, a contentious Stormont mechanism - a cross-community vote - was used by the DUP to effectively veto the proposal, as well as a later suggestion by the Minister that the measures be extended for only one week.

The DUP has accused Sinn Féin of “somersaulting” and changing their position, citing comments by the Deputy First Minister, Michelle O’Neill, in an interview on Sunday, in which she said the Executive was looking at ways of “opening things up perhaps without alcohol”.

DUP sources have also claimed Sinn Féin changed direction on the instruction of its Dublin powerbase, a claim which has been robustly rejected by Sinn Féin.

“We always said any movement had to be based on medical advice,” a senior Sinn Féin source said.

Eight further coronavirus-related deaths were reported by the North’s Department for Health on Wednesday, bringing the total number of fatalities to 810. An additional 791 people tested positive for the virus.

While the number of positive cases detected each day has been falling, the average number of cases per 100,000 of population in Northern Ireland over the last seven days remains at 206.5. A total of 441 people with coronavirus are being treated in hospitals in Northern Ireland, with 47 in intensive care.

“The last four weeks of hard work and sacrifice has flattened the curve but only to a plateau, we’re not coming down off that peak of the second wave, it’s much worse than the first wave,” the chair of the British Medical Association in Northern Ireland, Dr Tom Black, told the BBC.

Businesses in Northern Ireland on Wednesday expressed frustration that there was still no clarity so near the deadline, which the chief executive of Londonderry Chamber of Commerce, Paul Clancy, described as “an impossible position to be in.”

“We understand that these are grave issues and this is not an easy task, but tough decisions must be made ... without further delay,” he said.