Deliveries expected to begin by the end of the year, subject to regulatory approval 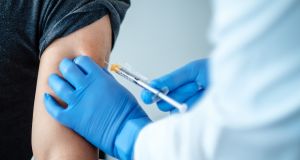 The BioNTech-Pfizer shot is in pole position to be first of several potential vaccines under development to receive regulatory approval. Photograph: BioNTech SE 2020/PA Wire

The EU has agreed to buy up to 300 million doses of the groundbreaking coronavirus vaccine developed by BioNTech and Pfizer, following widespread hopes that the jab will provide a route out of the pandemic.

Pfizer said deliveries were expected to begin by the end of the year, subject to the vaccine receiving regulatory approval from the European Medicines Agency.

“Today’s finalised supply agreement with the European Commission represents the largest initial order of vaccine doses for Pfizer and BioNTech to date and a major step toward our shared goal of making a Covid-19 vaccine available to vulnerable populations,” Albert Bourla, the chief executive of Pfizer, said in a statement on Wednesday.

The jabs will be made in Germany and Belgium, and member states that opted into the deal would place orders separately, the company said. Jens Spahn, Germany’s health minister, said on Tuesday that he was hoping to secure 100 million doses of the vaccine for the country. Based on its population share, Ireland is in line to receive more than two million doses of the vaccine.

Initial trial results released by the companies on Monday showed the vaccine to be more than 90 per cent effective. The BioNTech-Pfizer shot is in pole position to be first of several potential vaccines under development to receive regulatory approval. BioNTech executives have said approval could come within weeks.

Exploratory talks for the deal, which has now been finalised, were initially disclosed in September. It was originally planned to be announced alongside news of the scientific breakthrough on Monday, but concerns about liability delayed the announcement, according to people familiar with the negotiations. Those concerns have been resolved, the people said. Pfizer declined to comment.

Governments globally have scrambled to secure advance orders of several vaccines under development, in an attempt to ensure an exit from the pandemic. The virus has killed more than 1.25 million people worldwide, according to data gathered by Johns Hopkins University.

The UK has been negotiating supply deals separately to the EU, and has already placed orders for 40 million doses of the BioNTech-Pfizer vaccine. The companies plan to manufacture up to 1.3 billion doses by the end of next year.

Other coronavirus vaccines are undergoing the final phases of testing, and initial results are expected before the end of the year. Other candidate vaccines include those made by AstraZeneca and the University of Oxford and the US company Moderna.