Public warned against illegal sale of puppies by breeders 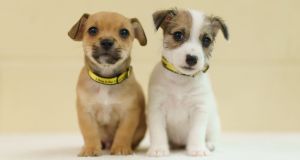 The pandemic has seen “puppy inflation” with puppies going for between four and five times their pre-lockdown value in the spring and early summer.

Ireland’s largest dog charity has warned the public against the illegal purchase of puppies.

The Dogs Trust “Sold a Pup” campaign is highlighting new legislation around the sale of puppies that was introduced in February.

The Animal Health and Welfare (Sale or Supply of Pet Regulations) 2019 makes it a legal requirement for puppies to be eight weeks of age or older before being sold.

A microchip number for each dog must be displayed on any advertisement, as well as the dog breeding establishment registration number, if applicable and a seller/supplier number for anybody selling more than five pets in a calendar year.

The pandemic has seen “puppy inflation” with puppies going for between four and five times their pre-lockdown value in the spring and early summer as people sought the company of dogs while confined to their homes.

Dogs Trust executive director Becky Bristow said prices eased off in the summer and autumn, but are now going back up again as Christmas approaches and the realisation “that we are not going back to regular living any time soon”.

The average price of a pedigree puppy is now €1,400 and it is a lucrative market for unscrupulous breeders.

Ms Bristow stressed inflated prices is only part of the problem with farmed puppies.

“We did a private survey of vets about puppy farms. They are seeing the consequences of it. There are very high veterinary costs for puppies that are bred into broken bodies.”

The Dogs Trust has found that 72 per cent of the public is unaware of the regulations and 68 per cent are unable to spot an illegal ad. Hence the name of the campaign “Sold a Pup”.

She cited the example of the family who bought a cockapoo named Bailey online for €1,150. Restrictions meant the family were unable to travel to collect him so a lorry driver friend picked him up and brought him home.

Upon arrival, it was clear Bailey was a completely different dog to the one advertised and the seller, who provided no paperwork, suddenly became uncontactable.

A trip to the vets quickly established Bailey was in fact a springer spaniel and the dog was covered in lice, an indication of the poor conditions he originated from.

Ms Bristow added: “Most people wouldn’t dream of buying their dog from a puppy farm; however, the sad reality is many unwittingly do so.

“Puppy farmers often go to extreme lengths to hide the true environment their pups originate from as they prioritise profits over the welfare of the dogs in their care.”

She said the recent legislation made it clear that puppy farmers have to ensure their dogs display a microchip number while displaying a dog breeding establishment number.

The animation demonstrates the reality of where purchased puppies may come from and how easy it is for puppy farmers to hide behind the façade of online adverts.

Dogs Trust is urging the public to sign its petition to help end the illegal sale of dogs using the hashtag #SoldAPup.

It is calling on the government to enforce the already existing laws as a matter of urgency and to penalise those who do not comply.