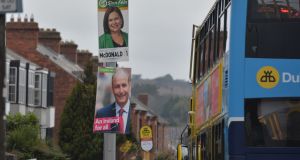 The Northern Executive is due to discuss divergences between Northern Ireland and the Republic on what countries people can visit without having to quarantine for 14 days when they return home.

There are just 15 countries on the “green list” of permitted countries in the Republic, whereas Northern Ireland allows travellers visit a total of 59 countries without having to quarantine on their return.

The Northern Executive on July 9th agreed that the same 59 permitted countries in England and Wales also would apply in the North from July 10th.

First Minister Arlene Foster said at the time that the North’s list “includes countries like Spain, like France, so that people can go on their holidays and not have to quarantine when they come back to Northern Ireland”.

She said it was a devolved matter and the Executive had the discretion to alter the list of countries. It decided, however, to use the same list as England and Wales.

In contrast, the Scottish administration reduced the list of permitted countries to 57 by exempting Spain and Serbia.

Countries not on the list of 59 include the United States, Canada, China and Portugal.

Taoiseach Micheál Martin referred to the list of 59 countries when defending himself against charges from Sinn Féin leader Mary Lou McDonald that the “green list” had created “absolute confusion” about travel and that the Government’s handling of the issue was “cack-handed”.

“Instead of managing the risks that we clearly face you have now pursued a reckless policy with virtually no checks and balances,” she told Mr Martin during Leaders’ Questions.

The Taoiseach accused Ms McDonald and Sinn Féin of “opening up the island” to people from 59 countries. People who visit Northern Ireland can also enter the Republic.

“The deputy and her party had a view that it was okay to open the island to 59 countries – that is a fact,” said Mr Martin.

The Taoiseach added that the Government was operating a “much more conservative approach” to international travel.

On Wednesday a Sinn Féin spokesman said “travel restrictions on to the island need to be consistent so that one part of the island is not used as a back door to the other”.

“Travel on to the island from countries where Covid-19 rates are higher than here needs to be restricted on a consistent basis, North and South,” he said.

“As an island we are a single epidemiological entity, as recognised in the Executive’s plan in response to Covid-19. We need to realise this advantage of living on an island.”

The Northern Executive, when it meets on Thursday, is expected to discuss this anomaly.

Separately, the Department of Transport in the Republic has confirmed that after the Brexit transition period on June 1st next year a green card will be required for motorists from Britain and Northern Ireland driving in the Republic or in other European Union countries.

Green cards are documents issued by insurers to prove that drivers have motor insurance cover when driving in another jurisdiction.

“As it stands, following the transition period, a green card will be required for vehicles from the UK, including Northern Ireland, being driven in Ireland or other EU member states, unless the European Commission declares otherwise,” said a spokesman for the department.

Drivers from the North will not require an international driving permit or a “GB” sticker on their vehicle when driving in the Republic from January 1st.

Motorists from the South will not need green cards to drive in Northern Ireland.