Disabled woman awarded €200,000 after claim she had to leave home due to mine collapse 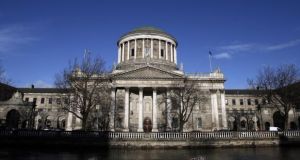 An intellectually disabled woman who allegedly had to leave her home in Co Monaghan as a result of the collapse of an adjacent mine has secured €200,000 under a settlement of her High Court action.

While noting concerns of Margaret Kieran’s family about the adequacy of the settlement, Mr Justice Kevin Cross said on Wednesday he would approve it for reasons including liability which was much at issue, and the risk if the matter went to trial.

The defence disputed Ms Kieran and her elderly mother Louisa were compelled to leave their home at Drumgossat, Magheracloone, Carrickmacross, as a result of subsidence at the mine, the court heard.

David Kieran, a brother of the plaintiff, told the judge she was now living with him but was unhappy and wanted to be back home and that their mother Louisa, aged 91, is very ill and living with their sister.

Ms Kieran (49), suing by David, had taken proceedings against Saint-Gobain Construction Products (Ireland) Ltd. It was alleged, arising from significant subsidence in September 2018 at a mine owned by the defendant near Ms Kieran’s home at Drumngoassatt, she had to vacate her home. It was claimed the defendant’s old mine workings are under the Kieran farm and end about 50 metres from the family home.

It was claimed Ms Kieran was very independent and functioned at a high level. She worked at a local hotel until about 2009, attended a sheltered workshop up to 2017 and after that attended a day care centre. In an affidavit, her brother said she had a happy and settled existence in the family home with her mother until the accident at the mine turned her routine and lifestyle “on its head”.

Her medical experts had reported she suffered significant psychological distress in the form of an acute distress disorder and an adjustment disorder while reports from the defendant’s medical experts took a different view of her condition.

David Kennedy SC, for Ms Kieran, said he considered the full, “best case scenario”, value of the case, was €300,000 while the settlement offer was €200,000. A previous offer of €150,000, made after mediation, had not been accepted and Mr Kieran and the family were not happy with the latest offer.

Counsel noted the court, when rejecting the earlier €150,000 offer, had concerns about issues including causation and remoteness if the case went to trial. If the €200,000 offer was rejected by the court, the matter would go to trial, he said.

The incident has had “a life changing” impact on Ms Kieran, counsel said. Her family home, in which she and her mother held a life interest, remains uninhabitable and her mother has a seemingly chronic illness. Mr Kieran told the judge he had concerns about the settlement offer but would be guided by his legal team and the court.

The court heard, prior to the mine collapse, there were plans to “reconfigure” the family home when their mother was no longer able to look after Ms Kieran with a view to her having supported accommodation. Having considered the matter, including the risks if the case went to trial and Ms Kieran’s mother being no longer able to care for her, Mr Justice Cross said he would approve the settlement and wished Ms Kieran and her family well for the future.

1 Children found dead in their Dublin home were murdered
2 Young homeless mother may have been dead in tent for a number of days
3 Aldi, Lidl bow to pressure to ban non-essential ‘middle aisle’ sales
4 Cork shootings: Gardaí believe older son was shot multiple times
5 The real Contagion virus is out there and it’s causing virologists to worry
Real news has value SUBSCRIBE