Newly-released files ‘provides window into every parish in the country’ 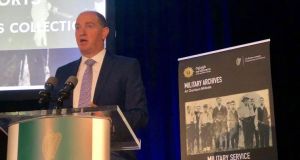 Minister of State at the Department of Defence Paul Kehoe said the newly-released files will shine a unique spotlight on the ‘activities undertaken by ordinary people pursuing the ambition of nationhood’.

The release of the brigade activity reports (BAR) will give an “unprecedented insight” into the history of the Irish revolution, the Minister of State at the Department of Defence Paul Kehoe has said.

Thousands of files, covering the activities of all 151 Irish Volunteer/IRA brigades from 1913 to 1923 have been digitised and put online.

Most of the files cover the War of Independence in depth, but a substantial minority also cover the Easter Rising and Civil War.

The files include 8,300 significant events which can be searched for online such as major ambushes in the War of Independence and a drop-down menu, county by county.

Speaking at the launch in Cathal Brugha Barracks, Mr Kehoe said the files will allow for the identity of individuals involved in operations at a local level to be known and “provides a window into every parish and townland across the country”.

He said the newly-released files will shine a unique spotlight on the “activities undertaken by ordinary people pursuing the ambition of nationhood”.

“Through first-hand accounts, we are exposed to the less well-known or celebrated support provided by ordinary volunteers across Ireland, ” he said.

“The wealth and depth of the material offers opportunities for meaningful engagement and learning by academia, historians, citizens, educational institutions and our diaspora in understanding our often complex history and key event on our path to nationhood.”

He paid tribute to the public officials in the early years of the State who had kept the huge archive of the military pensions collection for posterity.

Cecile Gordon, the project manager of the Military Service Pensions Collection (MSPC), said hundreds of people have already accessed the site since it was put online at midnight and many have spent several hours reading files.

To date two million pieces of paper relating to individual pension applications and to brigade activity reports have been digitised and put online.

She cited the example of one of the most famous incidents of the War of Independence, Bloody Sunday, November 21st, 1920, in which 15 people, most of them British intelligence officers, were shot dead.

It was now possible, she stated, to know seven of the eight men of Michael Collins’ squad who were involved at Morehampton Park at which three men were shot dead.

It was possible to do so by looking at the names listed in the BAR and cross-checking with individual pension applicants.

She said: “The obvious lesson is an easy one - the brigade activity reports give most value, serve most sense side by side with the broader pension collection that needed and depended on them right from the very point the brigade committees started sending their findings in.

“But more than that it proves how powerful the pensions files as a whole are in taking us beyond the obvious figures, the officers and the higher-up, the well-known and the often interviewed, to the men and women of the revolution neither the Bureau (of Military History) or Ernie O’Malley had the time or inclination to seek out.”

She suggested that the pensions files will challenge the “Dublin’s fighting story” type narrative of the Irish Revolution and there is a more complicated story beneath.

Professor Fearghal McGarry of Queens University Belfast (QUB) said the pension files showed that “disappointment and disillusionment” were the dominant narrative in the pension files and that many of those who fought felt undervalued afterwards.

The brigade activity files can be accessed at www.militaryarchives.ie