General Seán Mac Eoin was known as the ‘Blacksmith of Ballinalee’ 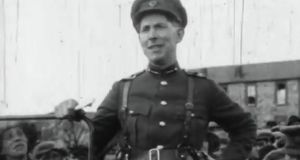 General Seán Mac Eoin, known as the ‘Blacksmith of Ballinalee’, was widely regarded as one of the most successful IRA commanders during the War of Independence. Photograph: British Pathé/Youtube

General Seán Mac Eoin, known as the ‘Blacksmith of Ballinalee’, was widely regarded as one of the most successful IRA commanders during the War of Independence.

His defence of Ballinalee from the Black of Tans in November 1920 and the Clonfin ambush of February 1921, at which four Auxiliaries were killed and eight wounded, were regarded as models of guerilla warfare. He also won praise even from the enemy for ensuring their wounded were treated after Clonfin.

Mac Eoin went on to become a general in the Free State army, a Government minister and presidential candidate for Fine Gael on two occasions.

Yet the testimony he provided to the referees and advisory committee overseeing the issuing of military pensions was “irresponsibly credulous as to strain charity,” according to newly released documents in the Brigade Activity Reports (BAR).

Mac Eoin was the chair of the Longford Brigade Committee which was set up to provide a list of engagements against Crown forces in the county.

He provided hugely detailed maps about activities carried out in the country during the War of Independence. These were contained in his papers in UCD and have been digitised by the Military Service Pensions Collection as part of the release of the brigade activity fields.

The number of Crown forces deaths recorded by the Longford Brigade Committee was grossly exaggerated.

This includes a claim that 15 Black and Tan deaths occurred during the Battle of Ballinalee where in fact none occurred.

Mac Eoin’s committee also claimed six deaths at Clonfin not four. Three deaths were reported for an ambush in Turlough which resulted in a single fatality – a RIC man. Three are recorded also as having been killed in ambushes at Tarmonbarry and Clondra though there are no records of fatalities for either incident.

Queens University Belfast (QUB) historian Dr Marie Coleman, who carried a detailed analysis of the brigade activity reports for Longford, says her research and that carried out by the project, the Dead of the Irish Revolution, lists 15 dead for the county during the War of Independence.

She calculates that the BAR committee reports includes at least 27 more - almost tripling the number of dead in Longford.

She concludes the Longford committee’s reports for the county were “careless and negligent to say the least” and were exaggerated to bolster the claims for those from the county who were seeking a military pension.

In order to qualify for a military pension, an applicant had to have participated in at least two major engagements. An action where a member of the Crown forces was killed qualified as a major engagement.

The assessors shared the same incredulity about the evidence presented to them by Mac Eoin’s committee.

They checked contemporary newspaper reports and could find no evidence for several of the ambushes claimed for in the files.

One referee Tadgh MacFirbisigh, the one who said Mac Eoin’s testimony “strained credulity”, believed there was “grave grounds for suspicion but not positive proof to date, that there was a good many other cases of blatant fraud in this county”.

He noted that Mac Eoin had sought to enhance the claims of his former comrades as they were also his Dáil constituents and therefore voters.

In 1946 criminal proceedings were taken against Michael Ryan, a Longford veteran, who claimed for a higher rank in the IRA in order to get a better pension. He was acquitted for lack of evidence.