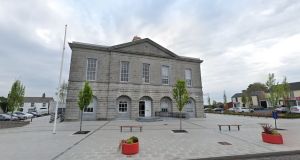 The Edenderry eHive is one of a series of facilities which the Government hopes will be at least part of the answer to rural employment and long distance commutes. Photograph: Google Street View

Commuters from Co Offaly to Dublin who currently spend up to six hours a day in a car, have been given a new opportunity to “cut the commute”, and work in an “eHive” in Edenderry.

Opened on Thursday at a cost of €300,000, and grant aided by the Town and Village Renewal Scheme, the eHive provides workers with dedicated or shared desks, along with highspeed broadband communications, which allow users to be virtually present almost anywhere in the world.

The Edenderry eHive is one of a series of such “hives” or “hubs” which the Government hopes will be at least part of the answer to rural employment and long distance commutes which are damaging to both health and the environment.

Among those who have already availed of the opportunity to abandon the daily commute to work is Sean Brereton, an architectural technologist and designer whose employer, 2020 Glazing, is based in Ballincollig, Co Cork.

Mr Brereton is from Edenderry, and works five days a week for his Cork based employer, designing in the specialist glazing business, from his Edenderry desk. He negotiated the position with the company, as an alternative to driving or moving to Cork. He now lives with in a 10-minute commute to eHive.

Freddie Grehan who has worked as a sports travel agent for the last 2O years is now moving to the eHive to launch his new business focussing on golf holidays, soccer matches and other sporting events to the Chinese and US markets.

James Merrick originally from Edenderry is another eHive user. He has recently returned to Ireland from the United States where he attained a Doctor of Philosophy (PhD), Management Science and Engineering from Stanford University.

Currently dividing his time between Silicon Valley and Edenderry, he said he was working on “mathematical optimization models as decision support tools for strategic infrastructure decisions in energy and transport”. His clients include a research institute in Palo Alto, California, a startup in San Francisco, and large semi-state company based in Co Offaly.

He also has other projects that he works on with a team he has built in San Francisco and works with collaborators in a number of entities.

The Town and Village Renewal Scheme is part of the Action Plan for Rural Development and the Government’s Project Ireland 2040 Programme for Rural Regeneration. Funding awarded to individual towns and villages generally ranges from €20,000 to €100,000, with a small number of projects – including the eHive – receiving up to €200,000 for more ambitious proposals.

Opening the project in Edenderry on Thursday Minister for Rural and Community Development Michael Ring said “the eHive project would encourage technology, digital media and internet companies to the location and in turn will generate new job creation opportunities.

“This type of work model has proven to be successful in other locations in the midlands and hopefully will bring employment opportunities to Edenderry as well.”

“Mr Ring said the scheme was part of the Government’s “commitment to supporting rural Ireland”, which was further underscored through “a €1 billion Project Ireland 2040 Rural Regeneration and Development Fund which complements the Town and Village Renewal Scheme”.