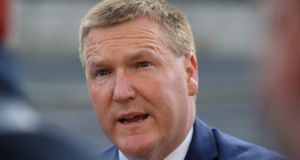 The Government wants a new pay agreement for the country’s 340,000 public service staff but this cannot come at any price, the Minister for Public Expenditure and Reform Michael McGrath has said.

The Minister also told a conference on industrial relations on Friday that unemployment levels were likely to worsen in the weeks ahead as a result of the heightened Covid-19 restrictions introduced earlier this month.

Addressing the annual Industrial Relations News conference, Mr McGrath said the current public service pay agreement would expire at the end of the year and Government and trade unions were exploring the scope for a new deal.

However, he said these talks were taking place “against the most difficult economic backdrop imaginable”.

“Such an agreement cannot be at any price. Our economy faces severe challenges in the years ahead, and Brexit is an ongoing threat to the economy.

“The Government believes in the potential of a collective approach to underpin our response to these challenges and our recovery. We will continue to pursue that objective through dialogue over the period ahead.”

“Ultimately we can’t control the fact that Covid-19has hit us, all that we can control is how, as a society and as individuals we respond to this challenge. I can assure you that the Government will continue to take the decisions necessary for our recovery.”

Mr McGrath said the necessary public health measures which had been taken in the face of the Covid-19 pandemic had “resulted in a sharp contraction in economic activity, with the size and speed of impact unprecedented in modern times”.

The Minister said at the peak of the crisis, well over a million people in Ireland were in receipt of some form of State income support.

“As of last Tuesday, nearly 300,000 people are in receipt of the Pandemic Unemployment Payment.

“According to the latest data from the Revenue Commissioners, a further 344,000 people are being supported through the Employment Wage Subsidy Scheme and over 211,000 people are on jobseekers payments. “

“With Level 5 restrictions in place, regrettably, many of these figures will deteriorate in the coming weeks. Elevated levels of unemployment will be one of the ongoing impacts of this crisis and the most challenging to address.”

The chief executive of the employers’ group Ibec Danny McCoy told the conference at the end of the year the country faced the same challenges that were there at the start.

He said social dialogue would be absolutely crucial.

Mr McCoy said he believed that Irish public sector had become “too small for the scale of the private sector”.

He said GDP in Ireland was about €360 billion.

He said the Government contribution in relation to public service pay and commercial semi-state companies was about ten per cent of this figure at about €36 billion.

He said the State transacted a lot more money and - this year there would be a record amount - but this will be on transfer payments in the main.

He said very few societies had a state that contributed as small a figure as ten per cent.

“If you look pre-Covid, our employment had risen to 2.3 million people at work. Of that 350,000 are public sector workers. You are looking at low teens as a percentage of the workforce.”

Mr McCoy said the ratio of public service workers to those employed in the private sector was getting out of balance.

“What we are seeing is that as people get richer - as evidenced by the disposable income and household savings being at record levels with €120 billion on deposit - is that a rich society demands better public services.”