Strong focus on mass movements, role of women and workers in series based on award winning book 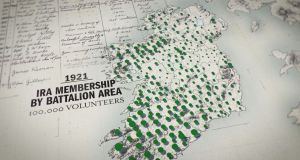 Donal Ó Drisceoil: ‘It’s very effective, making really good use of maps and graphics while it also has a good mix of new voices from the Atlas of the Irish Revolution’

Dr Donal Ó Drisceoil of the school of history at UCC said that the new three part TV documentary which is directed by Ruán Magan and narrated by former UCC law student and Cork born actor Cillian Murphy, makes for an innovative approach to telling the story of Ireland’s fight for independence.

“It’s very effective, making really good use of maps and graphics while it also has a good mix of new voices from the Atlas of the Irish Revolution, a lot younger scholars who contributed some really insightful papers to the book,” said Dr Ó Drisceoil.

“The other thing it achieves really well which was something we were very anxious to do in the Atlas, was to steer away from the ‘great man’ approach to Irish history. Of course Collins and De Valera feature, but there’s a very strong focus on mass movements and their role in the revolution,” he said.

“And the documentary captures that well, looking at, for example, the role of the international dimensions, the role of workers, the part played by women. The focus is very much on the themes that we identified in the Atlas and that comes through so it captures the book very successfully.”

When it came to chosing a narrator, the programme producers, Create One and Tyrone Productions brought in Murphy who was familiar with elements of the story of the Irish revolution from his part in Ken Loach’s 2006 Palme d’Or winning drama The Wind that Shakes the Barley.

After the screening President Higgins will participate in a question and answer session on how Ireland should commemorate centenaries of the War of Independence and the Civil War which will be moderated by broadcaster and historian Dr John Bowman.

Joining President Higgins will be historian, former minister of state at the department of finance and former Irish Times columnist Dr Martin Mansergh who is vice-chair of the Government’s expert advisory group on the decade of centenaries.

UCC lecturer and associate editor of the Atlas of the Irish Revolution Dr John Borgonovo of the school of history, and Dr Heather Laird from UCC’s English department – who last year wrote a highly acclaimed study on the decade of centenaries ,will also participate in the questions and answer session.

Atlas of the Irish Revolution, which was edited by Dr Ó’Drisceoil and Dr Borgonovo along with Michael Murphy and Dr John Crowley from UCC’s geography department is now in its fifth print with over 28,000 copies sold since launching in 2017 when it won Bord Gáis Energy Book of the Year.

The Irish Revolution begins on RTÉ One on February 4th