Conviction for contempt can result in unlimited fines 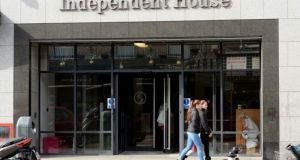 The Director of Public Prosecutions is pursuing a contempt of court action against the Irish Independent following the collapse of a rape trial late last year.

Lawyers for the DPP have filed a High Court action seeking attachment orders against the newspaper’s editor and another journalist as well as Independent News & Media which owns the Irish Independent.

The filing of the action effectively confirms the DPP has decided to pursue the matter through the courts and also commences the process in the courts.

While the action was only filed last week and the case has not yet been before a court, it will go before a judge on February 25th.

A conviction for contempt can result in unlimited fines, reaching several hundred thousand Euros for some newspapers in the past.

At times when individuals have been found to be in contempt of court they have been jailed until they purge their contempt. This usually involves the person agreeing to abide by a court order, such as staying away from another person or a place, that they had previously refused to comply with.

The DPP is now seeking attachment orders against editor Fionnán Sheehan and journalist Nicola Anderson as well as INM.

The matter relates to the collapse of an alleged rape trial last November as evidence was completed and the jury was beginning its deliberations. An article expressing concerns generally at the way alleged rape trials are conducted in the courts appeared in the Irish Independent on Saturday, November 24th.

At that point the trial that would collapse two days later had just heard five days of evidence and the jury was set to come back into court on Monday, November 26th, and deliberate on a verdict. The newspaper was publishing a series at the time about rape trials generally, around which there has been much debate in the Republic and the North in recent years.

It highlighted the fact that in some trials the alleged victim’s clothing or how much alcohol they had consumed was part of the evidence, adding society had had “a bellyful” of this. The article, by Anderson, also said “victim blaming” was being carried out in some trials relating to alleged rapes.

Efforts to seek comment from the newspaper about the DPP pursuing a contempt of court action were not successful on Sunday.