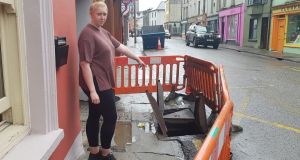 Louise O Donovan of The Eldon Hotel in Skibbereen pointing out how high the flood waters reached during Storm Ellen.

The new €37 million flood relief scheme for Skibbereen was not at fault for the flooding which affected up to a dozen homes and businesses in the town, Minister of State Patrick O’Donovan told flood victims during a visit to the town today.

Mr O’Donovan, who has responsibility for the Office of Public Works, visited the Bridge Street area of Skibbereen on Friday where premises such as the Eldon Hotel ended up under two feet of water after flood water came gushing down the street during Storm Ellen on Wednesday night.

He said he was anxious to allay any concerns among the residents and business people that the main OPW flood defence works, now substantially completed, had in failed or were to blame for the flooding on Bridge Street.

“Having witnessed the terrible damage from flooding in other areas of west Cork only last week and now here again in Skibbereen as a result of Storm Ellen, I am seeing at first hand the havoc and destruction that severe weather and intense rainfall can cause to communities,” he said.

“It has been explained to me that the flooding in Bridge Street on Wednesday was caused by a capacity issue and blockage in a storm drain at the Cutting/Rossa Road and was not in any way connected with a failing in the main OPW flood defences now installed in the town.

“I would like to assure the people of Skibbereen that I and my officials are fully satisfied that the main flood scheme is working effectively and has ensured that more widespread flooding and damage in the town has been avoided.”

Mr O’Donovan said flooding which occurred on the Cork Road in Skibbereen during Storm Ellen was again completely separate from the main flood relief scheme and occurred due to an undersized culvert under the main N71 road.

Earlier, Ezra MacManamon of the OPW told The Irish Times the flooding on Bridge Street stemmed from minor works not being completed on time on a culvert on the Cutting which caters for a stream whose existence only came to light during the major flood relief scheme.

“The major flood relief scheme did its job on Wednesday night but very late on in the construction of the scheme, we became aware of this very minor local water course in the Cutting when it flooded some 16 properties on the Main Street in 2016 - it just wasn’t on our radar until then.

“We had a public consultation period but nobody brought this minor water course to our attention but since then Cork County Council has worked to improve the design and construction of the inlet into culvert and we have provided funding to them to carry out that work.”

Cork County Council said in a statement that the Skibbereen Flood Scheme was focused on preventing flooding from the main river, the Ilen and its tributaries while also taking account of tidal effects. It said this scheme was substantially complete and had fulfilled its purpose.

However, during the delivery of the main flood relief scheme, a number of areas in the town were identified where surface water drains had the potential to cause flooding and one of these locations was the Cutting just off Bridge Street.

Cork County Council said the OPW provided funding for a minor works project to build a screen chamber where the overground drain entered into a piped drain but the work was interrupted by Covid-19 though the screen has since been completed and was due for installation this week.

“Unfortunately it was not possible to complete this work before Wednesday night’s unusually severe summer storm, where the rate of rainfall reached 40mm an hour resulting in exceptional rainfall which overwhelmed the storm drain system at the Cutting,” said the Council.

The result was this stream overflowed on to Bridge Street causing flooding to a number of premises in the early part of the night, said the Council.