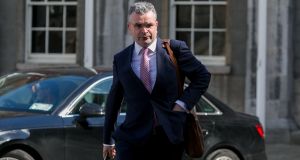 Dara Calleary resigned as Minister for Agriculture on Friday morning following a political controversy over his attendance at a golfing event on Wednesday. Photograph: Collins

A major political crisis has erupted over a dinner held by the Oireachtas Golf Society that has led to the resignations of the Minister for Agriculture and the Seanad leas-cathaoirleach and also prompted a Garda investigation into the event.

Dara Calleary and Senator Jerry Buttimer, who resigned their roles on Friday morning, were among more than 80 people at the dinner at a hotel in Clifden, Co Galway, held to mark the 50th anniversary of the Oireachtas Golf Society.

Since late June, indoor gatherings have been restricted to 50 people under the Government’s public health controls in a bid to stop the spread of Covid-19. Further restrictions announced this week identified only weddings and artistic and cultural events as being allowed to have groups of up to 50.

Ireland’s EU commissioner, Phil Hogan, and Supreme Court Justice and former attorney general Séamus Wolfe were also in attendance, and they have also faced intense criticism and calls to resign.

The event “flew in the face” of key messages on social distancing and other public health measures to combat the spread of the virus, he said.

Mr Hogan said he attended on the understanding the dinner would comply with Government guidelines. In a statement later on Friday, Mr Hogan’s spokesman said the commissioner apologised for any distress caused by his attendance at the dinner.

Mr Woulfe said it had been his understanding the organisers and hotel had satisfied themselves they would be operating within public health guidelines.

“That I ended up in a situation where breaches may have occurred, is of great regret to me, and for which I am sorry. I unreservedly apologise,” Mr Woulfe said.

Sources across Government expressed shock and disappointment at the sprawling controversy and deep concern over its impact on the Government’s standing and wider support for its efforts to combat Covid-19.

Garda headquarters confirmed on Friday it is investigating the event on suspicion it breached the Covid-19 regulations.

“As this is an active investigation An Garda Síochána has no further comment,” the force said in a statement. Under the Covid-19 regulations it is a criminal offence to organise an event – indoors or outdoors – with a larger number of people than that permitted by the regulations.

The Ceann Comhairle, Seán Ó Fearghaíl has written to the secretary of the Oireachtas Golf Society suggesting that, “in the aftermath of this week’s events in Clifden, the society as it is currently structured and named be wound up as a matter of urgency.”

He added: “This I believe is a necessary action for the society in the aftermath of this week’s events. The event has seriously undermined and damaged public confidence in the Oireachtas and in what I hope is our mutual commitment to public health and to the people we serve.”

In a statement on Friday morning the Taoiseach said Mr Calleary’s attendance at the event was “wrong and an error of judgement on his part”.

“People all over the country have made very difficult personal sacrifices in their family lives and in their business to comply with Covid regulations. This event should not have gone ahead in the manner it did given the Government decision of last Tuesday.”

On Friday evening in an interview on RTÉ’s Six One news programme, he said it was “a monumental error of judgement on behalf of all who attended and I’m deeply disappointed at what transpired.”

When something like this happens it does make it more difficult for us, for government, to get the core message across,” he said.

Citing concerns over the separation of powers, Mr Martin would not be drawn on the appropriateness of the attendance of Supreme Court Judge Seamus Woulfe, but he did say “I have no doubt those who attended should have been in full knowledge of the rules and of the regulations.”

In my view, people must have felt going in there that there’s something wrong with this,” he said. “They should have weighed up in advance what was happening in my view given the large numbers that apparently were there.”

She said people needed to see the Dáil back in action and “this very chaotic government held to account”.

Ms McDonald said there was no equivalence between a funeral and golfing shindig. She herself had been criticised for attending the funeral of Belfast republican Bobby Storey which appeared to breach regulations on social distancing and numbers of attendees at funeral Masses.

Green Party leader Eamon Ryan said the golfing dinner in Clifden should not have taken place and Mr Calleary was correct to resign. “Cabinet ministers who participate in making decisions that impact people like this have a duty more than anyone else to stick to the regulations.”

There is a very justifiable and understandable anger over what happened in Clifden and it is not misplaced, the State’s acting chief medical officer Dr Ronan Glynn said on Friday evening.

It was very clear what happened was not in line with public health guidance, he added.

In an interview on Mid West Radio earlier in the day after his resignation Mr Calleary acknowledged the damage he had done to front line workers and public health staff and their families.

“Specifically in my letter of resignation I acknowledged front line workers and their families and public health workers, the damage I’ve done to their work, unintentionally. I absolutely fully support their work, they’ve done huge work in the last six months and they’ve made huge sacrifices and my actions undermine that work,” Mr Calleary said in the interview.

“So, to all of our front line workers, all of our medical, HSE and our public health people who often don’t get acknowledged I’m genuinely very sorry for undermining their work as well.”

In a tweet posted on Friday morning, Senator Jerry Buttimer confirmed he had resigned from his position as leas cathaoirleach of the Seanad.

Tánaiste Leo Varadkar and the Taoiseach have removed the party whip from Fine Gael and Fianna Fáil Senators who attended.

Mr Calleary is the second minister for agriculture to go from the current administration. His predecessor, Barry Cowen, was sacked in mid-July by Mr Martin after refusing to make a second public statement about a drink-driving ban imposed on him four years ago.

It is understood Mr Calleary first informed the Taoiseach of his attendance at the golfing society dinner during a brief phone call when Mr Martin was visiting the flood-hit town of Skibbereen in west Cork on Thursday.

The pair spoke again at length late Thursday evening about the political controversy and agreed to reflect on it overnight. They spoke again early on Friday morning, and Mr Calleary told the Taoiseach he would resign. Sources said the pair agreed it was the appropriate course of action.

Minister for Education Norma Foley said Mr Calleary had made a “very serious error of judgement”, but he had “shown leadership” in resigning. “It is a measure of the man he has done that.”

The dinner event was attended by a number of current and former members of the Oireachtas. Former RTÉ radio presenter Sean O’Rourke also apologised for attending the controversial dinner.

Following Mr Calleary’s resignation the Taoiseach will temporarily assume responsibility for the Agriculture and Marine portfolio.

The event, held in Clifden, is understood to have involved a golf competition followed by a dinner in the Station House Hotel. It was organised to celebrate the 50th anniversary of the Oireachtas Golf Society, whose membership includes TDs, senators, as well as some civil servants and journalists who work in Leinster House and organise regular golf outings.

It is understood that at the dinner following the event, the room was divided into two by a partition, with fewer than 50 people at either side.

The table plan for the event listed 82 people for the dinner with up to 10 people per table, though it is understood that Mr Calleary’s table only had six people.

According to one person who attended, the organisers had satisfied themselves, after consulting with the hotel, that they were operating within the official guidelines.

However, sources say that the partition between the two rooms was pulled back for the speeches.

The Taoiseach meanwhile has also admitted that government messaging on aspects of fresh Covid-19 restrictions advanced this week was confused. By moving quickly, sometimes measures for certain areas, like the arts and theatre wasn’t as clearly articulated as it should have been, he said. “But we have to weigh up speed to get the numbers, to get the virus down,” he said.

He said he could understand the anger of publicans who have been forced to keep their doors shut, and while maintaining that schools would reopen and were adequately equipped to do so, he said “some schools will have greater challenges than others, that I acknowledge, and there’s no one size fits all.”

He also said the Cabinet had approved plans for the State to make advance payments for a supply of Covid-19 vaccine, should it become available. He said the State is part of a European consortium with the involvement of Oxford University and AstraZeneca.

“We did approve resources to enable us to be part of that advance payment for a supply of the vaccine should research and the trial prove positive and should a vaccine emerge.”

Mr Martin said it was his intention that sufficient supplies of any vaccine would be secured for the entire population. “There’s a broad European agreement which would involve per capita allocation, and in the initial phase one would want to protect the most vulnerable in terms of the vaccine itself if one emerges and that certainly would be on the agenda and there are other candidate vaccines in the offing as well,” he said.

He said his sense “is that there is light at the end of the tunnel. If we keep with this and keep going with this we can beat the virus and get through it.”