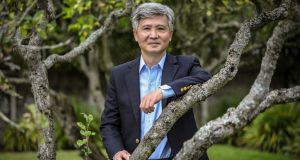 The Chinese ambassador to Ireland, He Xiangdong, at the Chinese embassy on Ailesbury Road, Dublin. Photograph: Crispin Rodwell

It is a socially distant age, and that involves some unusual arrangements. So an interview with Chinese ambassador He Xiangdong takes place in a pleasant garden at China’s embassy on Ailesbury Road in Dublin.

It makes for a less formal encounter. Two chairs are set on the lawn, and the ambassador cuts a relaxed figure in an open-necked shirt.

Two books are carefully set aside to be presented at the end. One is The American Trap and the other the autobiography of Edward Snowden, the whistleblower who exposed the inner workings of the US National Security Agency.

Before the interview begins one has a good idea of where this is going, and the phrase “groundless accusation” will likely be a recurring one.

China’s rise as a rival to the US in the economic and geopolitical sphere has been almost stratospheric. This country of 1.4 billion people has experienced extraordinary economic growth for the best part of two decades.

Diplomatic relations were established between Ireland and China as recently as 1979. Back then trade between the countries was worth several million euro annually, but last year it topped €17 billion.

“The most important thing in the past 40 years of this bilateral relationship is our two countries respect each other [and] co-operate with each other in a spirit of mutual respect,” says Mr He.

It’s not one-way traffic, as you might expect. China imported more from Ireland last year than it exported here. Last year more than 5,000 Chinese students arrived in the State, and there was a growing number of Chinese tourists coming before the Covid-19 pandemic kicked off. Social media giant TikTok is to invest €420 million to locate its European data centre in Ireland.

“That is a good example that the business environment in Ireland is very attractive to Chinese investors,” Mr He says.

The ambassador (56) took up his position in Ireland last year having previously been posted to South Sudan. He is a former journalist and deputy editor of World Affairs magazine, but has been a diplomat for most of his career.

China’s communist system has evolved to allow capitalism and the making of billionaire entrepreneurs. Internationally the country has faced criticism on two fronts. The first is that this highly controlled society is a dictatorship that violently represses dissent and non-conforming ethnic groups. The second is that it presents a global threat to western democracies, and is using underhand methods to advance its interests.

For instance, take the various claims from the US and Donald Trump about the Chinese using technology for espionage, via 5G networks, or through tech giant Huawei.

“We have heard a lot of groundless accusations from some US media and US government officials claiming Huawei technology [is] not safe. They have failed to present any concrete evidence,” says Mr He.

He instances TikTok and an allegation it is providing information from users to the Chinese government.

“There is no evidence Tik Tok is doing this kind of thing. This is a groundless accusation. This is nonsense. The only reason is that some people in the United States don’t like to see Chinese companies do better than US companies.”

He says the US used similar tactics against Japanese firms, including Toshiba, in the 1980s. He shows a photograph of a US congressman smashing a Toshiba video recorder at the time.

Referring to what he calls the myths propagated against China by western countries, the ambassador talks about the need for diversity, quoting John Hume’s well-known maxim that “difference is of the essence of humanity”.

For some, though, China does not live up to that maxim with its own population. Among the most serious charges made against it is that it has suppressed the ethnic Turkish Uighur population in Xinjiang province.

It is claimed that up to a million have been forced into concentration or re-education camps. There have been videos purporting to show blindfolded internees being herded onto trains. There have been claims of female sterilisation, of police repression, of mass resettlement of Hang Chinese, of deliberately trying to reduce, and pacify, the Uighur population.

All are flatly denied by the ambassador. “This kind of accusation is totally groundless and a lot of the claims are fabricated.”

He contends disparate images have been combined in some videos to make false accusations, and that the claimed figure of one million Uighurs being in concentration camps has been plucked from the air.

His central riposte is: why has the population of Uighurs doubled in the past four decades if the authorities are trying to reduce it?

The blindfolded prisoners have nothing to do with camps, and the footage merely shows prisoners being transferred from prison to prison.

“On some occasions you need to transfer prisoners from this location to another location. So it’s nothing to do with so-called concentration [camps].”

Hong Kong is rarely out of the news, with anti-government protests an almost daily occurrence for two years, often involving violent clashes between police and protesters. The immediate cause was a new law which allowed transfer of legal cases to mainland China. The fear is that China is intent on dismantling the “one-country two-systems” arrangement that has been in place in Hong Kong since 1997, and is suppressing personal freedoms of expression, assembly and protest. China denies this.

The interview takes place after Jimmy Lai, the prominent owner of Apple Daily, a news outlet critical of Beijing, was arrested and accused of conspiring with foreign powers.

“You mentioned freedom of speech or freedom of assembly,” says Mr He. “Any freedom has a limit. You also mentioned…Jimmy Lai is the owner of a newspaper there. But nobody is above the law.”

The accounts of protesters contradict that version. The “two systems” of Hong Kong envisaged a hybrid between Chinese communist society and a western-style democracy, but it has broken down in the worst way imaginable.

Would he agree with the proposition that Chinese authorities have used excessive force in rounding up and imprisoning people to clamp down on freedoms?

“The scenario is just the opposite,” he says. “Since Hong Kong returned to China in 1997, there have been [regular] demonstrations in Hong Kong.

“Demonstrators attack the police and they attack the people who disagree with them, who have a different opinion to them, and set them on fire, or stab them, or even try to kill them.”

The origin of the Covid-19 pandemic has been linked to Wuhan, China, but Mr He questions this conclusion when asked if wet markets, the apparent source of infection, will be closed down.

“In in the past few months and weeks we have received information or media reports saying that they have found Covid-19 cases earlier,” he says. “Outside China, here in Europe, or in the [United] States or somewhere else in the world.”

Is he saying that the virus might have originated outside of China?

“We have heard more and more information and media reports saying that last year, in September, or July or even earlier than that, they [discovered] possible cases of Covid-19 outside China. They have found the virus in the samples of sewage water here and there.”

Mr He said he had noted with concern the reports of attacks on and discrimination against Chinese people in Ireland. There have been reports that some of the attackers had shouted insults relating to Covid-19 and China.

He said An Garda Síochána was actively investigation the cases, and hoped those responsible would be brought to justice.

“We highly appreciate the solidarity of the Irish Government, public opinion, and people from all walks of life with the victims and their strong opposition to racial discrimination. It is the common enemy of mankind, and we shall be united together to oppose it.”