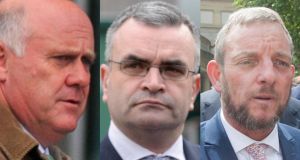 Several politicians who attended a dinner organised by the Oireachtas Golf Society in apparent contravention of Covid-19 guidelines have apologised for their actions.

More than 80 people attended the dinner earlier this week at the Station House Hotel in Clifden, Co Galway.

One of the organisers of the Oireachtas Golf Society dinner in Clifden says that it was not its intention to “disregard Government or health authorities’ advice”.

In a statement released to the Westmeath Examiner this evening, society president, the former TD and senator Donie Cassidy, said that the event that was attended by 81 people was held in two rooms following advice from the Irish Hotels Federation.

“A Garda investigation is now underway into an Oireachtas Golf Society Dinner which was held in two rooms at the Station House Hotel, Clifden on Wednesday night last under the department guidelines confirmed to us on Wednesday morning by the Irish Hotels Federation.

“I would like to apologise unreservedly on behalf of the Oireachtas Golf Society Committee for the hurt caused. It was not our intention to disregard Government or health authorities’ advice,” Mr Cassidy said.

“I have been legally advised not to make any further comment at this time. I confirm that I will fully co-operate with the Garda investigation,” he concluded.

On Friday morning, Dara Calleary resigned as Minister for Agriculture due to his attendance, while Fine Gael Senator Jerry Buttimer tendered his resignation as Leas Cathaoirleach of the Seanad.

In a statement, Mr O’Rourke said: “I should not have been at the dinner in Clifden on Wednesday. I don’t have a defence. I was invited to play golf and I really didn’t consider it beyond that, other than to assume whatever was happening would be acceptable from a public health point of view.”

The apology, posted on Twitter, said “I very much regret the lack of thought and interrogation on my part, and I apologise unreservedly for it.”

He addressed his apology to “those of you wondering what if I was still asking the questions rather than facing them”. Mr O’Rourke retired from RTÉ earlier this year. He had considered responding to questions on his attendance at the controversial dinner on RTÉ Radio 1, but decided against going on air.

One former Oireachtas member who attended the event said he was not aware it had been in breach of the public guidelines at the time, and the organisers had tried to keep attendance to 50 guests.

The long-time member of the golf society blamed the lack of clarity around the changing public health guidelines from the Government. “We’re blameless in one sense, but with the benefit of hindsight the dinner should have been cancelled,” he said.

Fianna Fáil Senator Paul Daly issued an apology, stating he should not have attended due to the “changes to public health advice”.

“As a public representative it was a serious lapse of judgment on my part and I am truly sorry. I apologise unreservedly for the upset I have caused,” he said.

“In light of the updated public health advice issued on Tuesday, I should not have attended this dinner. I genuinely apologise unreservedly for this error of judgment,” he said.

On Thursday night, Fine Gael Senator Jerry Buttimer confirmed his attendance at the event and acknowledged that in “light of the updated public health advice, I should not have attended”.

However, on Friday morning, he tendered his resignation as Leas Cathaoirleach of the Seanad.

“My attendance at a dinner party in Galway this week has compromised the Government at a time when people across every sector of Irish society are doing their best to keep all safe during this global pandemic,” he said in his letter to Seanad Cathaoirleach Mark Daly.

“It was an unintended but serious lapse of judgment in attending the event. I should not have attended the dinner and I hereby tender my resignation as Leas Cathaoirleach of Seanad Éireann to the Cathaoirleach of the 26th Seanad.”

He added: “For the last six months, this country has come and worked together to defeat Covid-19. It is an ongoing battle and our collective societal response is important and our individual actions matter. I wish everyone every success in this fight.”

Fine Gael Senator Paddy Burke also “sincerely” apologised for his attendance at the hotel, which he described as “an error of judgment on my behalf given public health guidelines”.

Donegal Senator Niall Blaney said he was “sincerely sorry for this error in judgment”.

“I am very conscious of the enormous effort by people to battle this virus and keep everyone safe. My attendance was therefore wrong and I apologise,” he added.

Speaking to the Waterford News and Star, Senator John Cummins acknowledged he should not have attended the dinner.

“I have been so careful in adhering to the public health advice since February and this was a lapse of judgment for which I genuinely apologise unreservedly,” he said.

Fine Gael Cllr Enda McGloin apologised “unreservedly” for attending the dinner. He said “in line with the sanction on my Oireachtas colleagues I am informing my party leader that I am resigning the Fine Gael whip on Leitrim County Council”.

Several other politicians and public figures who attended said they believed at the time that the event was not in contravention of the guidelines.

Noel Grealish, an Independent TD who is captain of the Golf Society, told Galway Bay FM that he sat at a table with six people and exercised social distancing.

Mr Grealish said he was assured the event met new public health guidelines but he now realises this was an error of judgment. Mr Grealish added he sincerely and unreservedly apologises.

European commissioner for Trade Phil Hogan said he attended the event organised by the golf society in “good faith, on the clear understanding that the organisers and the hotel concerned had been assured by the Irish Hotels’ Federation that the arrangements proposed to be put in place would be in compliance with the government’s guidelines”.

Supreme Court Judge and former attorney general Séamus Woulfe said it had been his understanding the organisers and hotel had satisfied themselves they would be operating within public health guidelines.

“That I ended up in a situation where breaches may have occurred is of great regret to me and for which I am sorry. I unreservedly apologise,” said Mr Woulfe.

Fine Gael Cllr for Kilkenny Martin Brett said he was told the function was operating within public health guidelines.

“If I was wrong for attending, I attended in good faith, and I unreservedly apologise in good faith as well,” he told the Kilkenny People.