Minister for Health Stephen Donnelly announces a new package of financial measures to businesses in Kildare after agreeing to extend the lockdown in the county by two weeks due to the high number of Covid-19 cases. 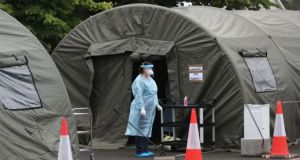 There have been a further 79 cases of coronavirus confirmed in the State, it was confirmed on Friday evening.

No new deaths were reported.

Of the latest cases notified 73 per cent are under 45 years of age.

Some 30 are confirmed to be associated with outbreaks or are close contacts of a confirmed case while 21 cases have been identified as community transmission.

In terms of where the new cases are located 43 are in Dublin, nine are in Kildare, six in Cork, six in Tipperary and the remaining 15 cases are in Clare, Donegal, Laois, Limerick, Louth, Mayo, Roscommon, Wexford and Wicklow.

Earlier the Government announced a new package of financial measures to businesses in Kildare after agreeing to extend the lockdown in the county by two weeks due to the high number of Covid-19 cases.

The lockdowns of neighbouring Laois and Offaly has been lifted, while the restrictions will remain for Kildare based on the advice of the State’s National Public Health Emergency Team.

The local restrictions in Kildare “are working but they need more time,” Minister for Health Stephen Donnelly said as the Government extended the county’s lockdown.

He said schools would reopen in Kildare as planned, despite the extension of restrictions aimed at curbing the spread of infections from food plant outbreaks.

The State’s acting chief medical officer Dr Ronan Glynn said he was hopeful that the number of cases in Kildare would begin to decline but that the county needed “a little bit more time now to turn the corner” and reduce cases in line with other counties.

“I would be cautiously optimistic that we are going in the right direction,” he said.

Mr Donnelly told a press briefing at Government Buildings that the total number of cases per 100,000 people stood at almost 200 in Kildare compared with a national figure of 27.

Dr Glynn said Kildare accounted for one third of all cases in the country last week.

The minister said the people of Kildare, Laois and Offaly has shown the country that “targeted measures can suppress this virus” and how to “avoid more aggressive restrictions.”

“I know this is difficult news for families, businesses and communities across Kildare but make absolutely no mistake: your efforts are working, your efforts are saving lives and your efforts are preventing the sort of measures being needed that we all lived through earlier this year,” he said.

Dr Glynn said that a high number of new cases continued to be reported daily in Kildare with infections widely distributed across the county. The seven- and 14-day incidence rates have been at “several multiples of the national average,” he said.

There was “cause of cautious optimism” in Kildare given that the rate of unexplained community transmission was not out of line with national levels and that the numbers being treated in hospitals and critical care units remained low, he said.

“This indicates that measures appear to be working but due to the overall volume of active cases, more time is required to reduce the number of cases in Kildare,” he said.

Mr Donnelly said he was “very aware” of the anxiety of parents with schools reopening but that a “huge amount of work” has been done to prepare for a safe reopening.

Dr Glynn said that international evidence is that children do not commonly transmit the virus to each other or to adults in schools and that schools do not drive community transmission.

He said that four key workplace clusters in the county and a number of clusters in direct provision centres “do seem to be largely brought under control” but the measures were being extended in Kildare to stop the virus spreading more widely into people’s homes.

Asked whether he was worried that the public anger over the flouting of Covid-19 guidelines by Oireachtas members at a golf society dinner in Cliften would undermine requests to adhere to public health advice, Dr Glynn said: “Perhaps I am naive but I am not concerned.”

“Public buy-in” had been at the heart of the public response and he felt there was an understanding of the importance that people had to protect themsleves and their families, he said.

The Tánaiste and Minister for Enterprise, Trade and Employment Leo Varadkar said earlier that further assistance would be provided to Kildare businesses following the decision to extend restrictions.

“I realise how disappointing today’s news will be for the people of Kildare. It has been a devastating few months for business owners, their staff and families,” he said.

“By extending these restrictions now, we will avoid further, more damaging measures later on. We must do everything we can to protect people. The people of Kildare are making a sacrifice on behalf of the entire country. I recognise that and we are redoubling our efforts to help businesses.”

The local lockdowns of the three counties, introduced two weeks ago in response to a surge in Covid-19 cases linked to outbreaks in meat processing plants and food companies, were the first regional restrictions to be introduced by the Government during the five-month pandemic.

Infections have remained high in Kildare during the two-week lockdown of the counties.

Dr Ronan Glynn, the State’s acting chief medical officer, said on Thursday night there had been 455 Covid-19 cases in Kildare over the past 14 days compared with 81 in Offaly and 41 in Laois.

Following the decision of Cabinet to lift restrictions for Laois and Offaly and to extend the lockdown for Kildare, Mr Varadkar announced the additional supports for businesses.

The supports include large financial grants, greater assistance from the local enterprise office in Kildare, additional marketing grants and prioritised applications from Kildare for all schemes.

“I’m particularly concerned about small businesses and those in the hospitality sector. I have asked the Local Enterprise Office to make a list of recommendations for further measures that Government can take to help businesses in Kildare to maximise trade over the next two weeks,” said Mr Varadkar.

He said that the Government “will do everything we can to help.”

It comes as another 20 people in Northern Ireland have tested positive for coronavirus, according to the Department of Health, bringing the total in the region to 6,576.

No further deaths with Covid-19 have been reported.

Figures calculated by the Northern Ireland Statistics and Research Agency (Nisra) using information from death certificates, shows the total number of Covid-19-related deaths registered in the region to August 14th was 863. The departmental figures are based on patients having previously tested positive for the virus.