‘Facemasks on busy services is a misnomer, when buses carry just 14 people’ - operators 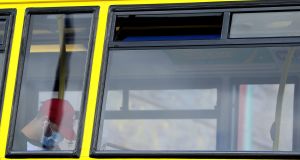 Commercial bus operators have written to the Department of Transport seeking an urgent meeting to discuss how passengers are to be carried in safety as more people return to work. Photograph: Brian Lawless/PA Wire

Commercial bus operators have written to the Department of Transport seeking an urgent meeting to discuss how passengers are to be carried in safety as more people return to work.

Separately, the National Bus and Rail Workers Union (NBRU) has said less than 1 per cent of bus users in Dublin were wearing a face mask on Monday, when the first relaxation of the Covid-19 restrictions came into place. The NBRU also said there was widespread flouting of the rules on social distancing, on Tuesday.

The union has written to the chief executives of Dublin Bus, Bus Éireann and Irish Rail warning that bus drivers or frontline staff can not be expected to police the social distancing rules on public transport.

The union called on the Government to show how current social distancing measures can operate as more people go back to work.

Taoiseach Leo Varadkar has said the Government advice is to wear facemasks or coverings “on busy public transport”, advice that has been reiterated by the National Transport Transport Authority, on its consumer portal Transport For Ireland.

However both the NBRU and commercial bus owners have asked for clarity on what is “busy public transport”, given that if buses are obeying current social distancing measures they are not “busy”.

General Secretary of the NBRU Dermot Lacey said the most a double deck bus could carry under the current rules was about 19. He said it was “irresponsible” to suggest buses get busier than that while the current measures on social distancing apply. He told The Irish times it was “ insulting” that unions representing those working on public transport were not “at the table” in the debate on safety, he said.

Now the operators of some of the State’s most recognised private bus companies have said they too have serious concerns about being left out of policy discussions on safety and operational issues, in preparation for large numbers of workers going back to their jobs.

Commercial operators Wexford Bus; Swords Express, Cobh Connect and Matthews Coach Hire cater for about 100,000 passenger journeys per week between them. Brendan Crowley of Wexford Bus said his commuter service between Wexford and Dublin currently carries a maximum of 14 passengers on coaches which are designed for about 56 passengers each.

Mr Crowley said commercial operators were not in a position to introduce more buses at 14 passengers per bus, as it was uneconomical. He said the commercial operators had been seeking a meeting with Department of Transport officials to discuss what is to be the policy for getting workers to their jobs, when further restrictions are lifted, but to no avail.

Mr Crowley said the National Transport Authority was helpful in its guidance, but was not in a position to provide an economic subsidy or set Government guidance on social distancing.

The Department of Transport said there was no legal requirement to ensure people on public transport used face masks. It said health advice was being followed in relation to cleaning and “social distancing measures across the network”.