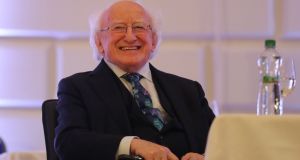 President Michael D Higgins has used an interview with an Italian communist newspaper to warn against a return to austerity and praise the response of Cuba to the Covid-19 crisis.

He also said the Irish response to the crisis “seems to be bearing fruit” but warned about “serious problems” if pandemic regulations in Northern Ireland were different to those in the State.

Mr Higgins said it was a “huge disappointment” for him to “see discrimination on the basis of age in the responses to the crisis by so many countries, even though they are motivated by the best intentions”.

The Irish Government is amongst those to have introduced special advice for the over 70s to protect themselves from the virus.

The President’s interview was carried in an edition of Il Manifesto, described as the “communist daily” although it has no links to any political party. Its reporter spoke to Mr Higgins remotely.

A report on the interview has been circulated among senior officials and Ministers in Dublin, where his views are said to have raised some eyebrows.

Mr Higgins revisited a theme familiar from the last economic crisis when he warned against any return of austerity policies.

“The price paid for austerity is a situation that must not come up again,” he said. “It is time for a paradigm shift, and this change must take place in the streets of Europe.

Mr Higgins was critical of the early response of the EU to the crisis, saying it “revealed a lack of collective action, not to mention a lack of solidarity in the unedifying competition for protective equipment and clothing, and even test materials”.

He also said that the recent decision of the German Constitutional Court – which called into question Germany’s participation in ECB bond-buying – “ is a serious threat to the Euro zone and the European Union itself”.

However, when the subject was raised with him, the President praised the response of Cuba, which sent doctors and equipment to Northern Italy to help efforts to tackle the virus there.

“The behaviour to which Cuba has accustomed us in responding to situations of grave need is an example of the acceptance of a collective responsibility that offers the best hope for an adequate response also to issues of sustainability, and even climate change. By sustainability I mean a form of eco-social economy that implies a consensus on the universality of fundamental rights,” he said.

He also criticised aspects of international sanctions against Cuba and Iran. “The inclusion of the medicines and materials necessary for the response to Covid-19 in the restrictions applied to Cuba and Iran is a clear violation of international law, which merits universal condemnation,” Mr Higgins said.

Mr Higgins said that the “language used to describe the vulnerability of older people has been revealing”.

“Where has a sociological perspective gone? Narrow-minded behavioural perspectives prevailed, while the value of phenomenological approaches to social gerontology was lost. My concern now, as a sociologist, is that we are retreating into a coldness of interpersonal relationships that it has taken us decades to get away from,” he said.