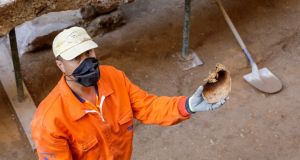 On day five of the dig in Valladolid’s Constitution Street on Friday, the archaeologists recovered human remains. Photograph: Twitter

Archaeologists in Spain have found part of a skull and a femur (thigh bone) in their search for the remains of Red Hugh O’Donnell, one of the great tragic heroes of Irish history.

O’Donnell died en-route to Valladolid, a city in northwestern Spain, in July 1602 having failed to persuade the Spanish king Philip III to send another army to Ireland to fight against the English.

On day five of the dig in Valladolid’s Constitution Street on Friday, the archaeologists recovered human remains.

A tweet from the city’s tourism and culture department read: “A part of the skull, a femur, and some more remains appear in what appears to be the access to the Chapel of the Marvels.”

The city’s culture councillor Ana Redondo posted a shamrock emoji and the words “estamos cerca” - “we are close”.

The archaeologists involved are also searching for the remains of Christopher Columbus, who in 1492 became the first European to discover the Americas.

He was buried in the same place as O’Donnell. However, Columbus’s remains were allegedly removed and reburied in the cathedral of Seville and later in the Dominican Republic.

Speaking on Friday, which was the 514th anniversary of the funeral of Columbus in Valladolid, chief archaeologist Óscar Burón said he believed that both O’Donnell and Columbus are “buried right under our feet and now we are concerned with checking whether the research we have undertaken is correct”.

He described O’Donnell as an “Irish prince and the hero of the resistance against the English”.

O’Donnell and his father-in-law Hugh Mor O’Neill, who between them controlled large parts of the north of Ireland, started the Nine Years War to drive the English out of Ireland.

It began promisingly and the Irish won a number of significant victories, but eventually ended in defeat following the siege and then the Battle of Kinsale in late 1601 and early 1602.

A combined force of Spanish and Irish troops was defeated by the English in one of the worst military setbacks in Irish history, after which Red Hugh fled to Spain.

Though Philip III never did provide the soldiers requested by Red Hugh, he did give him the equivalent of a royal funeral as described in the Annals of the Four Masters.

“His body was conveyed to the king’s palace at Valladolid in a four-wheeled hearse, surrounded by countless numbers of the king’s state officers, council, and guards, with luminous torches and bright flambeaux of beautiful wax-light burning on each side of him.”

He was buried within the Chapel of Marvels in the grounds of the Franciscan convent in Valladolid. The convent disappeared in 1836 and with it O’Donnell’s remains.

In a statement, Valladolid city council’s cultural department said finding the remains of O’ Donnell would be a “spur to the dissemination of this city abroad and also, of course, within Spain.

“The burial in Valladolid of these two characters of such relevance to the world as is the case of Columbus and to relations between Spain and Ireland against their common enemy: England, demonstrate the importance of Spain and specifically of Valladolid for centuries.”

On Thursday the team of archaeologists located other human bones, but not those of O’Donnell.

They hope that his remains will be easy to identify as he lost the big toes on both of feet from frostbite after he escaped from prison in Dublin in December 1591. He fled into the Wicklow mountains in the depth of winter. His companion Art O’Neill froze to death in the escape.