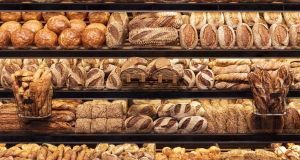 Not as many people have been buying bread as you might expect.

There has been a lot of attention paid to how we shop and what we have been buying since the start of the Covid-19 crisis began but what we are leaving behind has been largely ignored, at least until now.

Even before the virus arrived on these shores, people in Ireland were watching with an unpleasant mixture of amusement and alarm as shoppers as far away as Australia fought over rolls over toilet paper. Then Covid-19 came to Ireland and it was joined almost immediately by panic buying.

Spending in supermarkets on the day the Taoiseach Leo Varadkar announced that schools were closing on March 12th dramatically outstripped even the busiest shopping before last Christmas. That day saw sales climb 20 per cent higher than the average big Christmas shop with retailers recording a 60 per cent bounce on the same day the previous week. Toilet paper disappeared from shelves almost immediately.

While the panic quickly subsided as people realised that supply chains were pretty solid, spending has continued to surge.

The average amount people are spending on groceries today is up about 30 per cent compared with last year.

It is not just food people are buying. Manicures and home baking have been the unexpected beneficiaries of the pandemic with sales of nail polish remover, fake nails, hand creams and baking trays soaring as people have done their best to keep themselves busy and distracted from bad news while confined to their homes. Social media users have appealed for help in finding once niche products like yeast and “strong” white flour.

Sales of colouring books and jigsaws have also climbed as people have got used to life in lockdown.

But what about the Left Behind? What have we stopped buying? Obviously with the closure of virtually all retail outlets apart from those deemed essential – food shops and pharmacies mainly – people had no choice but to stop buying many things but what about the products that we could still buy that we have chosen not to?

Pricewatch got in touch with two of the leading retailers in Ireland – Lidl and Tesco – to find out what people are less interested in today than they were before the crisis began.

One of the surprising early fallers in the supermarket sweeps was bread, a product which would have been an early favourite to disappear.

It certainly had a great track record. When the Beast from the East blew into town just over two years ago the first thing that Irish shoppers reached for was the sliced pan. During and immediately after the snow came, bread could not be found anywhere and thousands of pictures and memes circulated widely on social media showed empty bread shelves.

We are predicting plenty of beards and lengthy locks this summer with items such as our hair gel, shaving foam, disposable razors moving a little slower from our shelves

“Oh people reach for comfort food like toast at a time of crisis” was the line from retail experts post-storm Emma. Well not during this time of greater crisis. Supermarket data as well as anecdotal evidence suggest that the professional breadmakers of our world have struggled in the face of unexpected competition from the amateurs.

Another victim has been grooming products – or at least those favoured by one gender in particular. While many women appear to have been actively seeking out such things, men appear to be to in grave danger of letting themselves go as the lockdown goes on with retailers reporting a significant decline in things which help men make themselves presentable over recent weeks.

“We have noticed that men are adopting a more relaxed approach to their grooming habits with a 23 per cent decrease in sales across our men’s grooming range,” a Lidl spokeswoman tells Pricewatch.

“We are predicting plenty of beards and lengthy locks this summer with items such as our hair gel, shaving foam, disposable razors and aftershave moving a little slower from our shelves than usual,” she says.

By contrast, she notes that there has been “a significant increase among our women’s beauty range” with nail polish remover, face creams and face masks all proving to be popular during the lockdown.

The spokeswoman for the discounter also points out that a 20 per cent bounce in sales of baking products had led to declining sales of some of its pre-made cake and confectionary lines including its premium cakes, queen cake buns and jelly sweets.

Sales of shoe care products have also fallen, no doubt because the need for shoes never mind shoe polish has been significantly less for months now

It will be interesting to see if our interest in baking can be maintained when the world starts to return to normal in the days and weeks ahead.

“Equally single serve yoghurt pots and drinks and lunchbox snacks have become less frequent purchases, compared with the same period last year.” Ready-made sandwiches are off the menu too.

The spokeswoman points out that with many customers now working from home, “cosmetic items have become less important from a shopping perspective”.

She says there had been a decline in demand for make-up, contact lens solution, hairspray and travel size toiletries.

Ah remember when we needed travel size toiletries to get through airport security? Good times.

People also seem less concerned about stains on their clothes with stain removers declining since the beginning of April. Sales of shoe care products have also fallen, no doubt because the need for shoes never mind shoe polish has been significantly less for months now.

What have you stopped buying?

We recently asked Twitter users what they had stopped buying since the crisis started. Here are just a selection of the responses.

Sliced Ham has disappeared as the need for lunch sandwiches has dried up. Single portion items have been replaced with family or large servings as we are sitting down to all meals together. - Derek Wynne

Razors (I don’t need to explain this one – do I?) Cooked meats (and all things packed lunch related). Prepared meals (when need feeding within 30 seconds of getting home from office). Cream, wine and anything else related to entertaining guests. - Jo Fearon

Nice yogurts like Rolo etc. Couldn’t resist walking by them but I do click and collect now (live in country not taking spots off people) so never think to add it to the shop but definitely spending more on food as we are keeping meal / bed time routine with kids and more baking. - Sandra Hunt McCann

Frozen pizza, used to buy an odd one or liked to have one in freezer if stuck. Would need too many now and no room in freezer. - Alice Reily

Diesel, clothes, ready made meals and cartons of hummus. I’ve time to make my own now. Hummus that is not the clothes! - Sonya Murray

No school lunches – so less bread and no Frubes, grapes or little bags of digestive biscuits. Oh and more spuds for all the Mammy dinners. Also bought roast beef for today for first time in years. Just to make it feel like Sunday. - Samantha Long

Soap and deodorant cos not going out. - Paul Kelly

Spring onions, because they don’t come in plastic (which I was delighted over) but now they’re a little too exposed to the elements. - Niamh Fitzpatrick