‘I should be alright pet, don’t worry’ – a father’s last words before his death 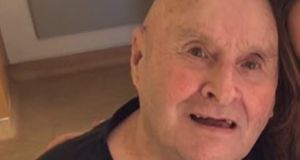 A little after 6pm on Friday, April 10th, Chelsea Murrayhill got a voice note from her father on Facebook messenger, sent from his nursing home bed, and she was unaware it would be the last time she heard his voice.

Brian Murrayhill (75) had been a resident in St Mary’s Hospital nursing home in Phoenix Park, Dublin, for two years before his death last month. The Health Service Executive (HSE)-run nursing home has been one of the worst hit in the country, with 24 coronavirus-related deaths.

Mr Murrayhill told his daughter he was “not very well today” in the audio voice note. In the short 22-second recording the strain and breathlessness in his voice is apparent. “I’ve been in bed all day long, but I should be alright pet, don’t worry, I love you” he said. Less than three days later he died in the early hours of Monday, April 13th.

“We had no idea he was sick, and then we were told he passed,” his daughter told The Irish Times.

The last time the family had seen him was through the window of his ground floor bedroom on 18th March. Born in England, he had lived in Co Leitrim before being hospitalised with cancer. He had moved into St Mary’s following his rehabilitation.

St Mary’s nursing home has 150 beds, and a separate 48 bed step-down hospital. It had its first coronavirus case on March 28th, and the first death from the virus on April 2nd. Two days later Mr Murrayhill’s ward had a confirmed case.

Over the course of April Covid-19 rapidly spread throughout the care home to nearly every ward, with significant numbers of residents contracting the virus.

“My Dad had severe respiratory issues; he had had cancer and a stroke,” Ms Murrayhill said.

The last time she spoke to staff in the home before her father’s death she had been told he was not suspected to have Covid-19, she said.

At 6am on April 13th she received a phone call to inform the family her father had gone into cardiac arrest and died. The family were told he had been swabbed shortly afterwards and later tested positive for Covid-19, Ms Murrayhill said.

“We weren’t notified that coronavirus was in his ward . . . I didn’t get to see him when he passed,” she said.

An internal St Mary’s memo – dated the day Mr Murrayhill died – said 20 per cent of residents in all but one ward were confirmed or suspected cases, and it was “reasonable to assume transmission is generalised” in the home.

Ms Murrayhill said she was “disgusted” by the high number of residents who had died from Covid-19 in the facility. “You expect the nurses to be looked after with PPE [personal protective equipment],” she said.

The funeral had been a closed-casket service limited to ten people due to coronavirus restrictions, which left the family without proper closure, she said.

A HSE spokeswoman said it could not comment on individual cases but expressed sympathies to the family and friends of the 24 residents who had died.

“As the situation with Covid-19 is ongoing, testing of staff and residents continues on an ongoing basis as required,” the spokeswoman said.

The HSE has appointed an independent investigator to examine allegations made by a healthcare worker of shortcomings at St Mary’s. The staff member’s protected disclosure alleged shortcomings in the supply of personal protective equipment, and lack of testing for staff at the start of the outbreak in late March.