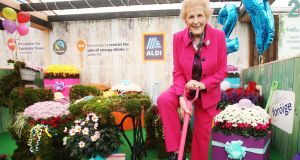 The only clouds on the horizon on the second day of the National Ploughing Championships in Co Carlow came in the shape of Brexit and beef, and were it not for the ominous shadows cast by both Bs it would have been a perfect day out for rural Ireland.

Even though the two topics were hard to avoid, the day came close to perfection, with the wellies, the woolies and the waterproofs left at home by tens of thousand of people who poured through the gates from early morning.

Many marvelled as the temperature quickly climbed past the 20 degree mark, and all told 113,500 people had a big day out, bringing the total attendance so far this week to a record high of 216,000.

With the weather set to remain sunny for the rest of the week, it is likely more attendance records will be broken before the curtain comes down on the 88th annual festival.

“We expected large crowds again today given the positive reports and great feedback received yesterday; the festive spirit was truly alive and well, with rural and urban dwellers alike relishing in the joyful mood,” the head of the National Ploughing Association, Anna May McHugh, said.

Revellers experienced all of the delights of the “ploughing”, such as a unique vintage display, top-class machinery demonstrations, the junior hunt chase, and sheep-shearing demos.

In the afternoon the best dressed “country style” lady and the “most appropriately” dressed gentleman competitions were hotly contested.

Carlow native Liz Farrell overcame stiff competition to take top place in the former category and secure a prize worth €7,000, including a holiday for two to Abu Dhabi.

The “most appropriately” dressed gentleman went to Gerry Johnston from Co Clare, who took home a custom-made suit and a weekend in Wineport Lodge.

The climax of the 88th National Ploughing Championships on Thursday will see the World Master Class Ploughers in action, with Taoiseach Leo Varadkar also set to make an appearance. He will most likely take comfort from the fact that in addition to the sunshine at least one of the storm clouds – in the form of the beef crisis – appears to be clearing.