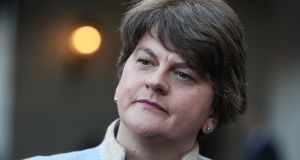 DUP leader Arlene Foster: party may accept a new Brexit deal which treats the North differently to the rest of the UK subject to conditions. Photograph: Brian Lawless/PA

DUP leader Arlene Foster has indicated that her party could accept special arrangements for Northern Ireland after Brexit as long as they did not affect the North’s position in the UK.

In a move that will raise hopes the DUP are ready to compromise to achieve a Brexit deal, Ms Foster said on Wednesday night there were solutions to the Brexit impasse that involved special treatment for Northern Ireland but did not affect the constitutional position of the North.

However, she said such arrangements would have to be supported by politicians in the North.

Her comments to journalists in Dublin suggest the DUP could possibly accept a new Brexit deal which treated the North differently to the rest of the UK, subject to conditions.

Asked if Northern Ireland-specific solutions were possible if they did not affect the constitutional position of the North, Ms Foster said: “Well, I hope so, because what we want to see working . . . I think what we want to see is a recognition that we are on an island. We do recognise the unique history and geography, but we also have to recognise that we are in the United Kingdom.”

Ms Foster warned that the existing backstop – which could keep the North under EU rules to avoid a hard border – “is anti-democratic, unconstitutional and has to go . . . that is our position”.

She said the backstop in the present agreement “would bring about customs between Great Britain and Northern Ireland and that is unconstitutional and undemocratic”.

However, her message in Dublin – that the DUP could accept different treatment to the rest of the UK for the North in a future new Brexit deal – will likely be seen as indicative of the DUP’s willingness to move in negotiations on a new Brexit deal.

She insisted that the DUP was not “a no-deal party”.

The DUP leader was in Dublin to address the Dublin Chamber of Commerce annual dinner. In her speech, she said solutions could be found which did not damage the integrity of the single market, but also did not “erect new barriers to trade within the UK”.

Afterward, she met Taoiseach Leo Varadkar for 45 minutes at Government Buildings where discussions centred on Brexit.

Earlier, the Taoiseach told the Dáil the Government would seek to have a “consultative role” in the government of Northern Ireland if the British government imposed direct rule after a no-deal Brexit.

The Taoiseach reiterated the Government’s opposition to the introduction of direct rule after Brexit, which is widely expected. But he also told the Dáil the Government would use the provisions of the Belfast Agreement to seek a role in Northern Ireland in such a situation.

“On direct rule, the imposition of direct rule by Westminster on Northern Ireland is not something that the Government can support. We believe it would be contrary to the spirit of the Good Friday [Belfast] Agreement and, in particular, the St Andrews Agreement,” Mr Varadkar said.

“However, if the sovereign British government were to impose it, we would seek a consultative role under the auspices of the British-Irish Intergovernmental Conference, as envisaged by the Good Friday Agreement.”

Coronavirus: People to be allowed to travel anywhere in their county from Monday as Ireland moves to exit lockdown 13:25
Make face masks compulsory in shops, public transport - Immunology expert 12:29
Twitter ordered to reveal who is behind parody Fastway Couriers account 12:21
Eight dogs worth €5,000 seized by gardaí in Co Tipperary 12:06
HSE says contacts of confirmed cases four times more likely to get Covid-19 11:39