Locals say safety and well-being of children has been overlooked 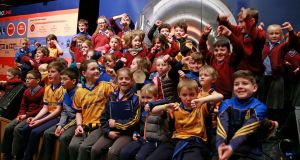 Na Fianna GAA club in Glasnevin has warned that the construction of Dublin’s MetroLink through its grounds could destroy “a cultural, sporting and community institution”, and prevent a generation of children from playing sport.

Construction of the proposed MetroLink is to begin in 2021, and will take an estimated six years to complete. The line, which will cover a 26km stretch from Swords to Sandyford with 12km running underground, is set to run directly under Na Fianna’s grounds, with a station named Griffith Park at the site.

Evelyn Conroy, who has children in both schools, has accused TII of overlooking the impact of the construction on the safety and well-being of children.

“The noise, the vibrations, the dust, the dirt, the pollution, all of that will affect our children,” Ms Conroy said at a public consultation meeting in Dublin City University on Monday.

“I’m also concerned about the number of workers on the site. I feel each member of that work team will need to be Garda vetted when they’re right beside schools where kids are playing.”

GAA president John Horan, who has a son in Scoil Mobhí, also attended the consultation meeting, where he voiced concerns around safety.

“You can never control the young lad with a spirit of adventure that’s going to, out of pure curiosity, wander onto that site. Parents will have to monitor the access of their children to school on a constant nature, and that’s not part of a child growing up.”

Mr Horgan said the GAA was “110 per cent behind Na Fianna”, and would support the club during the consultation period.

Na Fianna chairman Cormac Ó Donnchú said the current TII plans could destroy more than six decades of hard work by volunteers. One of the largest GAA clubs in the country, Na Fianna has more than 3,000 members with 169 competitive teams.

“While we’re in shock about the proposal, we fully understand that there’s a need for improvement in our transport infrastructure,” said Mr Ó Donnchú. “But we need to find a balanced way to achieve that that’s not only in the interest of economic drivers and profitability.”

TII director of communications Sean O’Neill said it was determined to “minimise disruption for all”, and was listening to the concerns of the local community. “It is difficult because a lot of people’s lives will be impacted but also benefit from it simultaneously.”

Na Fianna will meet the National Transport Authority on Tuesday to discuss further plans for the proposed line.