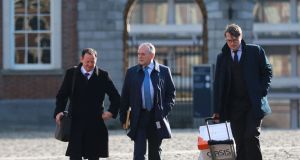 Former Garda press officer Supt David Taylor was “devastated” by the way he was being treated by senior management in the force, the Charleton tribunal has heard.

John McGuinness, who was chair of the Oireachtas Public Accounts Committee, told the tribunal on Monday he met Supt Taylor and his wife Michelle in the Skylon Hotel in January 2017, when the superintendent was suspended from duty. The Fianna Fáil TD said he found the superintendent quite distressed over his treatment, and worried for his family.

The tribunal is investigating allegations that senior gardaí had engaged in a campaign to smear Garda whistleblower Sgt Maurice McCabe to politicians, journalists and others.

In a statement to the tribunal, Supt Taylor said he was “directed to draw journalists’ attention to the complaint of sexual assault made against Sgt McCabe, and that this was the root cause of his agenda, revenge against the Garda”.

Supt Taylor said the instructions he received from the then Garda commissioner Martin Callinan were always verbal.

“When I met Supt Taylor he presented as a man completely devastated by the way he was being treated,” Mr McGuinness said.

Mr McGuinness said the treatment of Supt Taylor “had a similar ring to it to the way Sgt McCabe had been treated and others”.

Man on a horse

Mark Harty SC, on behalf of former garda John Wilson, said an incident in which his client stopped a man on a horse on Grafton Street, Dublin, happened in 1983 shortly after it was pedestrianised. Mr Harty said Garda Wilson took the animal into custody because it was being mistreated.

Mr McGuinness earlier told the tribunal that Mr Callinan told him Garda Wilson was a “headbanger” because he pulled the man off the horse and rode it to a Garda barracks.

Mr Callinan and Garda Wilson were based in the same station at the time, which was how the commissioner knew about the incident.

Mr McGuinness told the tribunal he considered Mr Wilson “ to be an honourable individual” .

Meanwhile, Micheál P O’Higgins, acting for An Garda Síochána and Mr Callinan, said the former commissioner had made it clear he “fundamentally disagreed” with how Sgt McCabe disclosed individuals’ personal and confidential data to the Public Accounts Committee.

Mr O’Higgins said that as a politician Mr McGuinness would be aware that criticising Sgt McCabe was not a popular thing to do.

Mr McGuinness said the issue for the Oireachtas committee was not popularity, but whether they could legally accept documents from Sgt McCabe, who alleged malpractice over the penalty points issue.

As a result, information in the documents was redacted, and Sgt McCabe gave his evidence in private.

Mr McGuinness said Sgt McCabe had answered questions from every member of the committee, and had not named any persons in his answers.

Mr McGuinness will resume his evidence on Tuesday.