Mystery surrounds US naval boat washed up on Aran Island

Drone-style vessel is used for gunnery training and may have drifted 5,500km across Atlantic 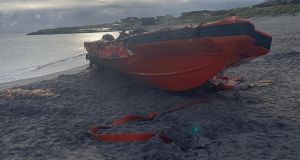 The US naval boat was found floating in the water by the Doolin Express on Monday. Photograph: Doolin Ferry Company/Facebook

A US drone-style military vessel has washed up off the coast of Inis Oírr, the smallest of the Aran Islands.

The Silver Ships AM800 High Speed Maneuverable Surface Target is used by the US Navy for gunnery training and can be manned or unmanned.

The vessel was discovered on Tuesday at 1.30pm by the crew of the Doolin ferry that sails between Doolin in Co Clare and the Aran Islands every day.

The red boat was floating in the water upside down. The ferry towed the boat to shore and it is currently on the beach.

How it got to Ireland is a bit of a mystery. The most likely explanation is that it came loose from its moorings at the huge naval base in Norfolk, Virginia, and was carried with the ocean currents 5,500 kilometres across the Atlantic.

The vessel was made by Silver Ships, a company based in Mobile, Alabama. According to an employee, David Hunt, responding on the Doolin Ferries’ Facebook page, the vessel that washed up on Inis Oírr was built in 2015 and is the 90th of its type to be built.

Doolin Ferries Company owner Liam O’Brien said the vessel showed signs of being in the water for a long time, perhaps several years.

He said the presence of goose barnacles on the hull suggests it could be in the water for three years. “They take an awful long time to grow,” he said.

“It looked like it was in good condition. On close inspection you can see there are a lot of bullet holes. It looks like there was an explosion on one side. It will cost a lot of money to repair.”

Man arrested in relation to the death of a man in derelict Cork house 16:08
Court extends period of bankruptcy of farmer whose cattle were shot to 2024 15:45
Immunity to Covid-19 could be lost in months, study suggests 15:12
Attempted gun attack on man in his 20s in Co Derry village 14:44
Twelfth at Home begins with service at Belfast City Hall cenotaph 14:25

1 ‘I thought it was a hoax’: Patient dies after Texas Covid party
2 Quarantine process to be tightened as health officials grow nervous
3 Maureen Dowd: Biden has his limitations but he’s no Trump
4 White House turns its fire on Anthony Fauci over Covid-19 comments
5 Dirty money: How the Mafia plundered Italy’s public health system
Real news has value SUBSCRIBE