Employment in primary care falls, as number of posts in acute services up by 820 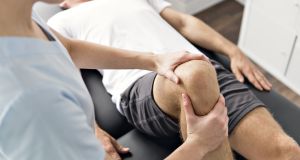 The Irish Society of Chartered Physiotherapists says the wait time for public patients has lengthened from one to two months, to more than six months. Photograph: iStock

More than 160 healthcare posts in primary care have been cut this year as a consequence of spending curbs imposed by the Health Service Executive, new figures show.

Employment in primary care – which covers a range of community services such as GPs, public health nurses and physiotherapy – fell by 166 between January and the end of July, according to the internal HSE figures obtained by The Irish Times. This is despite official Government policy favouring an expansion of primary care services.

In contrast, employment in acute services – mainly hospitals – has continued to grow; up 820 so far this year. The number of staff employed in social care services has also increased, by 320.

Doctors working in primary care say the staffing cuts are contributing to growing waiting lists for patients for physiotherapy, occupational therapy and other services in the sector. Primary care centres are finding it increasingly difficult to fill posts and secure locum cover for maternity leaves.

Staff shortages are worse in disadvantaged areas because they tend to have the highest rates of staff turnover, they say.

The Irish Society of Chartered Physiotherapists (ISCP) says the wait time for public patients requiring routine appointments has lengthened from one to two months, to more than six months, largely as a result of staff shortages.

“We’re leaving a population in pain as a result. You have patients with arthritic hips and knees who aren’t getting the physio they need, so they’re losing muscle bulk, they’re not getting rehab, and the burden on their carers is increased as a result,” says ISCP chief executive Ruaidhri O’Connor.

The problems with staffing are occurring across the board, in both primary care and public hospitals, he adds.

The HSE executive management team last month decided to keep in place the recruitment controls that were first put in place in the second quarter of this year, a spokeswoman confirmed. They were initially put in place for a period of three months.

“The position is still that the controls will remain in place until there is satisfactory evidence of traction and delivery of balanced financial plans from hospital groups and community healthcare organisations.”

The measures were imposed amid indications of the HSE running over budget once again this year. By May, its financial deficit had reached €170 million and it was forecast to exceed €500 million by the end of the year, before the putting in place of spending controls.

Unions representing healthcare staff have claimed a recruitment embargo is in place, with large numbers of posts going unfilled or staff appointed to posts unable to obtain a starting date for their employment.

However, the HSE denies any embargo is in place. “There is not a recruitment ban in place in the HSE. There is ongoing capacity to recruit new funded posts and also to replace critical clinical posts within frontline services,” the spokeswoman said.

“The preference is for these controls to remain in place for as short a period as necessary.”

1 One hundred Irish retailers for all your online Christmas shopping
2 Des Bishop apologises to Traveller community for comments in interview
3 Gym owner plans to defy restrictions and open
4 Miriam Lord: All test and no trace makes Jack, and heaven knows who else, a very ill boy
5 Family settle case over death in hospital of 23-year-old woman
Real news has value SUBSCRIBE