What is Jacob Rees-Mogg’s problem with Charles Stewart Parnell?

Irish leader was famous for his obstructionist tactics at Westminster 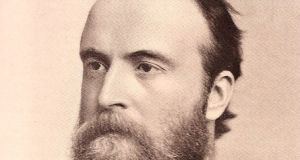 During the course of a frequently fractious debate in the House of Commons on Tuesday night, Jacob Rees-Mogg namechecked Charles Stewart Parnell – and not in a good way.

The attempts by the Opposition and rebel Tory MPs to wrestle the agenda from the British government was described by Rees-Mogg, the leader of the Commons, as the “most unconstitutional use of this house since the days of Charles Stewart Parnell when he tried to bung up Parliament”.

Rees-Mogg promptly sat down and was caught lying on the front benches with his eyes shut. A short time later the name of Parnell was trending on Twitter.

Taking 40 winks was certainly not something that Parnell’s Home Rule Party did during the mid-1870s. Parnell’s tiny party, just six members, decided to obstruct the business of parliament by seeking to filibuster bills going through the house.

They did so by talking for hours at a time, drafting in arcane amendments, going over the same territory again and again until it left their fellow MPs utterly exasperated.

The tactic of parliamentary obstruction originated with a former member of parliament from Cork, Joe Ronayne, who said the only way to get English MPs to take Ireland seriously was to take a serious interest in English affairs.

They began by objecting to every name put forward for the various parliamentary committees, necessitating a parliamentary division which took time.

They then switched to the business of the house, tabling amendment after amendment to legislation. Their purpose, as Parnell put, was to “force the house to treat Irish questions properly”.

During one session relating to the Mutiny Bill, Parnell and his fellow Irish MP Joseph Biggar challenged the government over almost 40 clauses which were otherwise relatively uncontroversial.

MPs began to dread the intervention of Biggar in particular, the member of parliament for Cavan. Biggar, who possessed a monotonous tone, showed astonishing nerve and stamina in frequently speaking for hours at a time on obscure subjects.

He would purloin books from the House of Commons library and begin to read from them at length. When the house speaker told him he was indistinct, Biggar moved closer to the front and started again – as he did so with the Threshing Machines Bill, an issue in which he had no interest or knowledge.

The tactic of obstructionism reached its peak during a 41-hour session to discuss the Coercion Bill of 1881. Eventually the House of Commons brought in new procedures to limit the ability of MPs to thwart the business of government.

Though obstructionism was bitterly opposed by the founder of the Home Rule party, Isaac Butt, who felt it would alienate British politicians, it galvanised the party into a more coherent unit and was hugely popular in Ireland.

In insulting the memory of Parnell, Rees-Mogg has inadvertently paid the “uncrowned king of Ireland” a compliment.