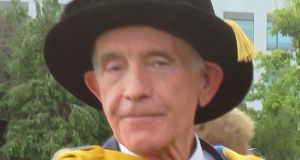 Br Tony Dolan, minister general of the Franciscan Brothers, who has been awarded an honorary doctorate by UCD.

A Franciscan brother has been awarded an honorary doctorate in science by UCD for his work in agriculture, Ireland and East Africa, particularly in sustainable agriculture.

Br Tony Dolan is minister general of the Franciscan Brothers, whose motherhouse is in Mountbellew, Co Galway.

He was principal of Franciscan Brothers’ Agricultural College, Mountbellew from 1972 until he moved to East Africa in 1989. Since then he has worked in agriculture education and development in both Kenya and Uganda.

The degree was conferred by UCD President Prof Andrew Deeks with citation and presentation by Prof James Kinsella, UCD School of Agriculture.

Prof Kinsella said “while his exceptional and wide-reaching achievements in agricultural education in Ireland, Kenya and Uganda are acknowledged as well as his outstanding contribution to the science underpinning sustainable agriculture and rural development - the true contribution of Br Tony is best seen in the powerful combination of intelligence, rigour, integrity and sheer humanity which he brings to his work”.

Responding, Br Dolan reminded graduating students that they were “entering a challenging environment in which you have to make your livelihoods and make a contribution to building a better world.

“But this has always been the case. In every era and in each of our lives there are always challenges. I know you are up to these challenges and you have the capacities to make major contributions to Irish society and beyond”.

Last April Kenyan Franciscan Br Peter Tabichi was presented with the Global Teacher of the Year award at a ceremony in Dubai. At the time Br Dolan commented: “that a teacher from an under resourced government secondary school in a poor rural area of Africa can be recognised as the best teacher in the world gives hope to all who have the vision for a fair world in which each person has the opportunity to live a life of dignity”.

Next year the Franciscan Brothers will celebrate the bicentennial of their foundation in Ireland. From the beginning they have been involved in education and rural development, firstly in the west of Ireland and, more recently, in the US and Africa.