Public may be ‘unknowingly shielding a killer’, warn gardaí

The family of murdered teenager Raonaid Murray (17) from Glasthule, Co Dublin have called on her killer to "do the right thing and confess your crime" on the 20th anniversary of her death. 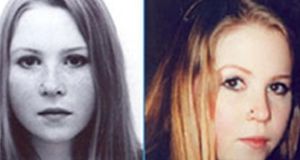 Raonaid Murray was murdered in 1999.

The family of Raonaid Murray has issued a renewed appeal for information on the young woman’s death, 20 years after the 17-year-old was murdered in Glenageary.

The Murray family released a statement on Wednesday morning appealing for the killer of their “beautiful child” to “come out from the shadows and own up to what you have done”.

“Do the right thing and confess your crime,” said Jim Murray in a statement on behalf of himself, his wife Deirdre and their two children Daniel and Sarah.

The body of Raonaid Murray was found at Silchester Crescent in Glenageary at 12.33am on Saturday, September 4th, 1999, less than 500 yards from her home. Murray had last been seen at around 11.30pm on Friday, September 3rd, as she made her way home from Dun Laoghaire town centre.

Gardaí called on Murray’s peers to reflect “with the benefit of maturity and hindsight” on any information which could be useful in the investigation into her death.

Although a large number of suspects have been identified, there is “no prime suspect” as no motive has been identified in the case, said a Garda statement, adding that in more than 3,400 witness statements, not one word of enmity was raised towards Ms Murray. A full time incident room remains in operation at Dun Laoghaire Garda station as the investigation continues.

In his appeal, Jim Murray spoke of recently looking through his daughter’s belongings where he “glimpsed again the young woman our child was becoming. There was still that beautiful fresh innocence of youth on the threshold of adulthood with all the excitement, wonder and possibility that brings it. For a brief moment she was ours again without this horrific shadow hanging over her.”

“It’s 20 years since Raonaid was murdered but to us her awful death is still vivid in our minds and we feel the pain of her loss every day,” said Mr Murray in an audio appeal release by an Garda Síochána. “We feel that the memory of that time will still be vivid for others as well. The gardaí have assured us of their continuing commitment to bring Raonaid’s killer to justice but they need your help.”

Mr Murray said there had been reports of people in the area at the time of the murder. However, some of these people never came forward. “We ask anyone who may have as yet undisclosed information to give that information to the gardaí,” said Mr Murray. “Help us find Raonaid’s murderer.”

“Time has not lessened our sense of grief and loss but sent it deeper and made it more profound. Raonaid died alone and frightened. Her killer is free. For Raonaid’s sake, help find her murderer and get the justice for her that she deserves.”

Gardaí warned that members of the public could be “unknowingly shielding a killer”. They asked anyone with information to contact the Garda Incident Room at Dun Laoghaire Garda Station, phone 01-6665000 / 6665012, the Garda Confidential line at 1800 666 111 or any Garda Station.

A reward for critical information received is available from Crimestoppers - Freephone 1800 25 00 25.