How does Ireland’s public transport compare with other countries’? 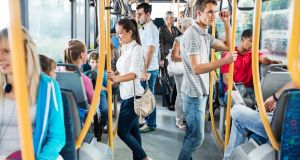 As pollution released by vehicles and industry continues to have severe consequences for our health and the environment, sustainable transport has never been more relevant.

Yet if judged solely by social media, Ireland’s public transport is terrible: expensive, overcrowded, slow, lacking reach, and outmoded when it comes to wifi.

But just how true is this? And are things better in other countries in the EU? For comparison, we chose Germany, the UK, and France – the big three in other words – and Denmark, Finland and Portugal – smaller EU countries of either similar geographic size or with similar-sized populations and economies.

Data on wifi availability or speeds on EU public transport is not available, although it is interesting to note that internet access is only beginning to be phased into some trains in France, Portugal and Germany. The latter is only scheduled to have free wifi on all inter-city trains by 2021, while regional trains are hit and miss.

Even in Denmark and Finland, rail wifi availability is mixed, even if, as in Portugal, you’re generally guaranteed connectivity on inter-city trains.

Britain is also a mixed bag. Although there is free wifi on some services such as Great Northern, it’s unreliable. More often than not, it’s unavailable. On Virgin services from London to Edinburgh or Manchester, you’re asked to pay €5 per journey.

Price is the biggest factor for travellers. According to Eurostat, Ireland is the ninth most expensive of the EU 28 member states when it comes to overall transport prices, including private passenger services such as taxis and planes.

But when it comes to train and coach travel, our research shows Ireland is holding its own.

Ireland: A ticket on our busiest inter-city route, Dublin Heuston to Cork Kent, is €19.99 if booked a few days in advance. A next-day single, however, is about €33. How does this compare with our EU neighbours?

UK: A next-day single from London to Manchester is at least €46 for a morning ticket, jumping to €196 on most later trains. Even accounting for the longer distance (330km v 260km), it’s more expensive than Dublin to Cork.

Trains from London to similar distances – say, Newtown in Wales – start at €80 for next-day travel. Cork-Belfast is €52, meanwhile, but a similar journey in England, London-Newcastle, is more than €25 dearer.

There are also some bargains in the UK if booking 12 weeks in advance, and selected trains from London Liverpool Street to Cambridge cost about €14, the same as a next-day train to Kilkenny from Dublin. Overall we come out pretty well in any price comparison with Britain’s private rail operators.

Denmark: Faster but more expensive than Ireland. A next-day train from Copenhagen to Odense (about 260km away) takes one hour and 44 minutes, and costs €41 one-way.

Finland: Finland is much more expensive for trains, and often slower. A journey from Helsinki to Jyväskylä, a city about the size of Cork about 260km and three hours and 30 minutes away, is just under €40 for a next-day single, more expensive than the Irish journey.

France: Geographically eight times larger than Ireland, France has an enviable transport network. A trip of 260km from Paris to Bayeaux – the ancient Norman city of tapestry fame – is a third cheaper than Dublin-Cork, costing as little as €22, changing at Caen. The journey to Lyon, 2.8 times longer than Dublin-Cork, cost €65 for a next-day single.

Yet although French trains are often quicker thanks to the TGV, they are not always cheaper. Metz is 330km from Paris, a longer journey than Dublin to Cork. Although the train takes half the time, it’s €50 for a next-day single – more expensive per kilometre.

Germany: Berlin to Dresden, about the same distance as Dublin to Cork (260km), takes about the same time and is cheaper for a next-day single, at €27.

Portugal: A single from Lisbon to Coimbra, a journey of about 200km, costs €21 for the following day’s travel online at cp.pt. Adjusting for distance, this is still about €5 cheaper than Cork-Dublin. A three-hour schlep to Porto can be had for as little as €26, also cheaper than Dublin-Cork.

Just 2.9 per cent of journeys in Ireland are made by rail but 17.2 per cent are made by bus, where the exponential growth of Irish motorways has led to an explosion of non-stop inter-city services.

Ireland: A next-day single express bus from Dublin to Cork costs €11.50 with UK-owned transport company Aircoach if booked online, and €14 with GoBe, the tie-up between Bus Éireann and GoBus.

If travelling today, however, GoBe is cheaper – still €14 if booked online – than Aircoach, which does not allow online booking on the day of travel, and costs €17. A next-day single from Dublin Limerick (177km) is €12 online with Dublin Coach.

France: It’s €15 for a three-hour, next-day trip from Paris to Caen, and €13.90 for the 330km to Metz. Adjusting for distance and the price index, this is slightly more expensive than the Cork-Dublin Aircoach price.

Portugal: Lisbon to Porto costs €10 by bus for a next-day ticket with Flixbus. Coaches for Lisbon-Coimbra, however, generally start at €14.60, which is more expensive than Dublin-Cork.

Denmark: It’s €11 for a next-day single from Copenhagen to Odense, which would be cheap in any country.

UK: When it comes to buses, Britain comes into its own. You can pay as little as €12 for a next-day single bus from Manchester to London, while London to Plymouth (the equivalent of Cork to Belfast) costs less than €17 by bus for next-day travel.

Germany: It’s just €9 for a next-day single from Berlin to Dresden with Flixbus.

Dublin transport: How does it compare with other European cities?

Despite costing well over €1.5 billion, the Luas carries roughly the same number of commuters into the city centre as cycling, with the number using bicycles stalling as decent infrastructure is awaited.

The NTA says the proposed Bus Connects route through Fairview will bring segregated lanes from Sutton to Connolly and could be a game-changer.

In the meantime, Dublin Bus remains the workhorse of the transport network in Dublin . But how does the price compare?

Dublin If you have a Leap card, the most you can spend in on Dublin transport– Dublin Bus, Luas and commuter rail services – is €40 per week. Once this limit is reached, you travel for free.

London Commuters’ fares are also capped at €40 a week, albeit only for the city centre. The cap reaches €70 if Heathrow is included. Verdict: Irish win. Copenhagen A city-pass large costs €133 for five days, although this also includes access to museums and galleries, as well as an extensive tram, metro and ferry system. Verdict: Irish win.

Paris Five days’ transport in the City of Lights is €65.80. Verdict: Irish win.

Berlin €37.50 for seven days for zones ABC in Berlin is about par with Dublin. Verdict: Draw.

Lisbon It costs €40 for a monthly Navegante card (or €6 per day using the Lisboa Viva). Verdict: Irish defeat.

Dublin It costs from €6-7 with Airlink and Aircoach to €2.50 with the 16 Dublin Bus for a single from Dublin airport into the city centre.

Paris You’ll also pay €10.10 to get from Charles de Gaulle into Paris on the RER B Blue, which is quicker than the Airlink service but works out more expensive. Verdict: Draw.

Helsinki A 45-minute local bus from the airport into the city costs €3.20, while the airport shuttle is 10 minutes quicker and costs €6.20. Verdict: Irish win.

Berlin It costs about €4 from Berlin Schonfield to the main station (Hauptbanhof). Verdict: Irish defeat.

Lisbon The airport is connected to the main city by a metro line, with tickets costing about €1.50. Verdict: Irish defeat.

The numbers: Where your transport tax goes

Out of your €100 in tax, this accounts for just €0.62. And out of that, just €0.06 goes on cycling or walking infrastructure, which is virtually non-existent in Ireland compared to the inter-city cycle paths of our UK and EU neighbours.

Cycling and green campaigners have called for this curious division of funds to be rectified in order to offer alternatives to driving.

While Irish Rail passenger traffic has returned to Celtic Tiger levels (45-48 million), it’s still a fraction of the passenger journeys in similar-sized countries such as Denmark or Finland (73 million and 85 million in 2017).

In terms of distance travelled, passengers in Ireland accounted for 2 million passenger-kilometres in 2017, versus 6.2 million for Denmark and 4.27 million for Finland. And yet despite just 10 per cent of Irish railway journeys being inter-city, Irish travellers still experience overcrowding.

Irish Rail’s Barry Kenny says the company is due to dramatically increase rail capacity (through investment in signalling, level crossings, electrification and so on) with a view to increase journeys to 75 million by 2025, and says the National Development Plan also foresees electrification of lines allowing Maynooth, Drogheda, the M3 Parkway and Hazelhatch to be serviced by the Dart.

He also says prices are “very competitive by western European standards”, pointing at the full tax relief earned on season tickets. Yet why is there such low take-up?

One reason is our vast motorway network which is, per capita, three times as long as the UK’s, and also longer than those in Germany, Denmark, Finland and France.

Some of our rural counties – such as Tipperary and Meath – are blessed by no fewer than three motorways.

The opposite is true of railways. Per capita, we have a shorter railway network than the likes of Finland, Portugal, France and Germany.

Dart Underground, long identified as the number one infrastructural transport priority by planners, has been mothballed, while new motorways and dual carriageways are planned for Cork and Galway. No new rail lines are planned.