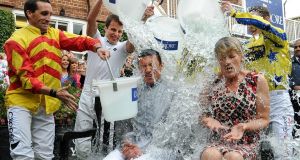 Income from fundraising at the Irish Motor Neurone Disease Association (IMNDA) last year nose-dived after a high enjoyed in 2014.

The bumper year for the charity in 2014 arose as a result of the Ice Bucket challenge. However, the IMNDA annual report for last year shows that the money collected from fundraising last year was down 59 per cent to €844,285 from the record €2 million raised the previous year – a drop of €1.2 million.

As part of a viral internet campaign during the summer of 2014, celebrities, government ministers and even nuns here made up some of the estimated half a million Irish people who participated by allowing themselves to be drenched in ice cold water. The Ice Bucket challenge generated €1.7 million of the €2 million raised by the association through fundraising in 2014.

The plunge in fundraising income last year resulted in the charity going into the red to record an operating loss of €156,848. This followed a surplus of €1.17 million in 2014 and successive surpluses in the years from 2010 to 2013.

The IMNDA is heavily reliant on donations and fundraising with only 15 per cent of its income coming from State sources last year.

There is no cure for motor neurone disease, and the progressive neurological condition which attacks the nervous system can affect the way a person walks, eats, drinks and breathes.

About 110 people are diagnosed with it – one every four days – in Ireland each year.

A spokeswoman for the IMNDA said: “Yes, monies from 2015 would be down from 2014 due to the incredible Ice Bucket challenge but it would not be too dissimilar to other years.

“In 2012 and 2013 we had some amazing corporate charity partners, which meant that corporate fundraising was increased – so last year our public fundraising would have been on par with other years.”